John Force is Over Paying People? Don Schumacher Says So!

John Force is Over Paying People? Don Schumacher Says So!

The NHRA season kicks off in Pomona, California this weekend, and right off the bat, ...

The NHRA season kicks off in Pomona, California this weekend, and right off the bat, before the first pair of cars have gone down the track in eliminations, there are sparks flying from the friction between two of the giants of the sport.

Even the most casual of fans likely heard about the crew chief-swapping drama that’s gone on between John Force’s multi-car team and the equally massive operation of Don Schumacher, as the drama has built continually over the past few seasons. Tensions seemed to have settled to at least a low simmer between the rival powerhouse camps of late, but there’s clearly still some animosity there, as Schumacher refused to shake Force’s hand as the two left the starting line during qualifying at the Winternationals.

Following the incident, both Force and Schumacher used carefully measured words to let their feelings be known in the most professional manner possibly, though Don did flat out take a left jab at Force’s jaw when he claimed that John is ruining the sport by overpaying his staff in a time when sponsor dollars are becoming precariously hard to find. While Force claims the two will be friends some day, it seems that peace may still be quite a while from solidifying.

Throwback, John Force in a heated argument with Tony Pedregon at the US Nationals 2009 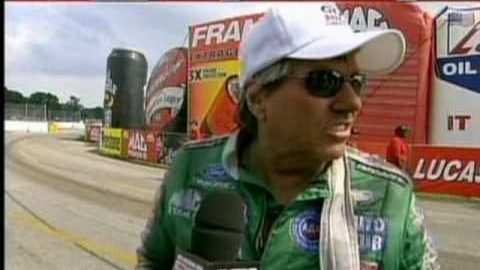