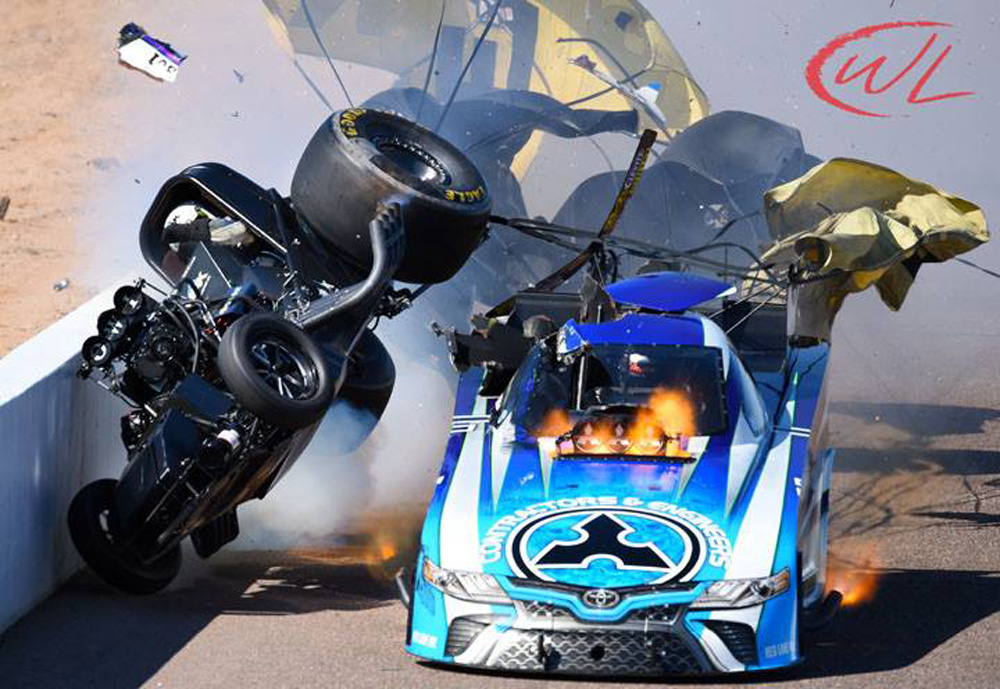 Funny Car legend John Force was transported to a local Phoenix-area hospital following this scary crash involving Team Speed Society Racing’s own Jonnie Lindberg at the NHRA Arizona Nationals. Lindberg walked away from the crash with no apparent injuries, while the NHRA’s Safety Safari had to work for several minutes to extract Force, who was conscious and talking with the safety crew.

The incident took place in the shutdown at Wild Horse Pass Motorsports Park, located just outside Phoenix, after the second round matchup between the two. Sixteen time world champion Force had won the round after Lindberg shook the tires early in the run, but his  Jon Schaffer and Jason McCulloch-tuned Chevrolet Camaro exploded the engine at the finish line, blowing the Peak Automotive Coolant body off the car. Force then crossed into the left lane in front of Lindberg, who’d gotten back in the throttle to make a race of it.

As Lindberg slowed, Force bounced off the wall to his right and became tangled in Jonnie’s chutes, dragging the rear of his car to the left and slamming the nose of the Head Racing Toyota Camry into the wall at a sharp angle. Both cars continued through the shutdown, bouncing off the left side retaining wall before finally hopping to a stop as the Safety Safari rolled up to assist. Lindberg exited his car without assistance and walked away while the safety teams worked to remove Force. The extent of Force’s injuries is unknown at the time, but we will update this article as soon as we know more.

This is the second race in a row that a member of the Force family has left in an ambulance after reigning Top Fuel world champion Brittany Force, John’s daughter, was injured in a crash at the season-opening Winternationals. Brittany returned to action in Phoenix behind the wheel of of Monster Energy-sponsored fueler.