Jumping a Golf Cart Is Never a Good Idea…

Jumping a Golf Cart Is Never a Good Idea…

Thank God for the invention of readily-available slow-motion video! With so many ...

Thank God for the invention of readily-available slow-motion video! With so many phones having the capability to shoot at 120 frames per second (or higher), we have a way to capture our buddies being idiots in spectacular slo-mo, which in my opinion makes the world a much better place, as long as those buddies don’t get hurt… too bad.

Most of us think of the golf course as a stodgy, boring place. Even active golfers who play weekly don’t think of the course as a place for idiotic alcohol-fueled shenanigans. I’m sure you can imagine where this is headed based on the context here: MOST OF US aren’t these guys.

With cameras rolling (from at least 2 different angles, too!) this guy gets a running start and dives into a bunker, catapulting the cart several feet into the air and sending the driver bouncing around inside. As the cart sails through the air, we see the driver struggling to keep his backside planted on the bench seat, but the force of the bounce out of the bunker was a little too much and he is left with nothing but the steering wheel to hang on to. The cart noses over and dives back to earth, sticking the front bumper into the grass and sending the driver flying.

The cart bounces around but stays on all four wheels and takes off rolling down the hill while the driver tumbles alongside, precariously close to getting himself ran over in the process. We’re going to assume he wasn’t injured, though he may have some cuts and bruises from the stunt.

It’s worth noting, because I played golf once, that driving the cart across the green alone is grounds for dismissal from the course, let alone jumping through and out of one of the bunkers. These guys clearly don’t care about that, but if you ever decide you want to try this, don’t plan on going back to that course again if anybody finds out! 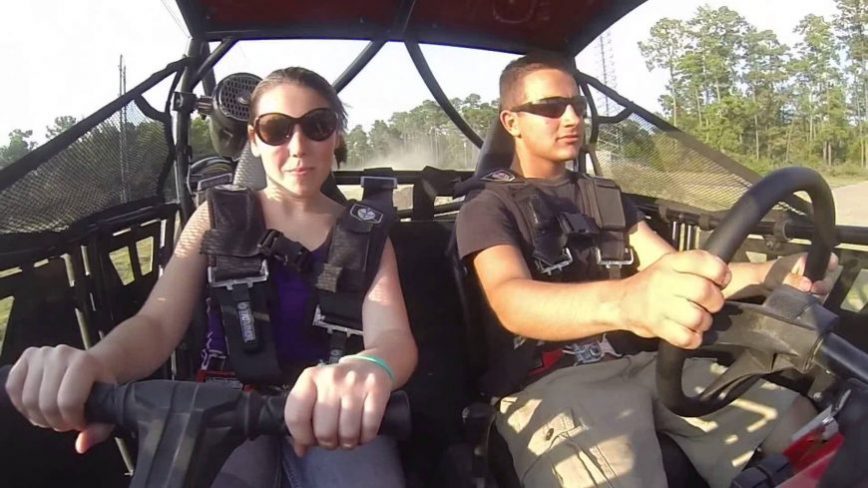