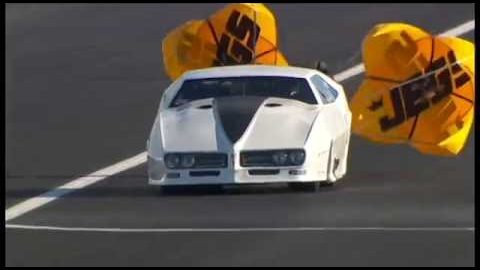 If we told you a year ago that Justin Shearer aka “Big Chief” from Street Outlaws would be making a pass at an NHRA sanctioned event, let alone the Chevrolet Performance U.S. Nationals, you probably would’ve thought that we were crazy.

Chief himself may not have even believed it, but here we are in 2016 and Chief has the Crowmod between the lines, making a pass in NHRA trim.

The first pass wasn’t an all-out  attempt as he cut it off early, rolling through the beams in 7.127-seconds at just 160mph as he took the beams at the finish line first.

This is just the beginning of lots of high-intensity action that you can expect to see in the future from Chief and his slick looking and performing set of wheels.

Check out the car’s first official pass in its maiden voyage below and tell us what your predictions are about what Justin has coming his way in the NHRA.

« The sketchiest rally Porsche you have ever seen