Kamikaze Chris Unveils New Car in Place of the Crashed Elco (There Are Plans For the Elco, Too!) 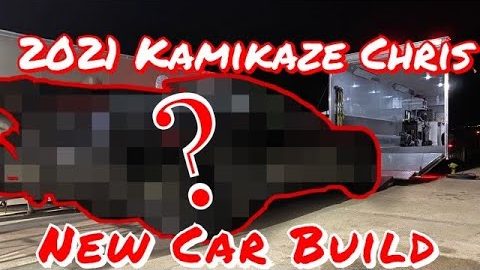 Without even including the ongoing pandemic, 2020 was a rough year for a lot of people. I think that many of us are glad that it’s finally in the rearview. It almost seems like the uneventful schedule throughout the year was never going to end. Among those people who had some pretty bad luck in the year, we find Kamikaze Chris.

Those who have been following along have probably noticed that Kamikaze managed to crash the Elco over the summer. The event was pretty catastrophic as the car ended up being wadded up into something that was difficult to recognize. With that, Chris has kept his feet in motion and moved on from the event but left fans to question what exactly his next move would be.

In a recent video, Kamikaze did make a couple of announcements in terms of what we can expect from his operation in the future. For starters, he gave us a little bit of an update on everyone’s favorite Chevrolet El Camino, informing us that “Yes,” he is planning to try to revive the car. However, he also comments that it’s going to be an expensive and time-consuming endeavor. The appropriate amount of time and money are things that Chris doesn’t have to spare at the moment. However, he also tells us that this is the car that really has his heart and he doesn’t want to build another El Camino but instead, bring this one back.

With that, he also notes that he wants to get back into racing as quickly as possible. Naturally, bringing the El Camino back is something that’s probably not going to happen for a while. Therefore, Chris decided that it made sense to pick something else up to help him race in the 405 while he’s also working on the Elco.

With that, Chris does inform us that he doesn’t quite have the budget to build a car exactly the way that he wants it but did find a good substitute in a pre-fabricated machine. Down in the video below, we get to catch up with the car that Chris has decided to call his own. In addition, we get some details about his future with the Discovery Channel as well. Granted that these are only the first couple of moves in the new year, 2021 is already looking up for this Street Outlaws favorite!