If there’s an A-lister who has been known for breaking out the creativity, ...

If there’s an A-lister who has been known for breaking out the creativity, it’s probably Kanye West. With a career that started out in what was a dominant role in hip-hop has taken more turns that we can count. Yeezy has done everything from experimental music to his own fashion. It makes a lot of sense that if a creative guy like Kanye were to pick out a new car, he would customize it himself. Actually, it would almost seem out of the ordinary if he were to have it any other way.

As it turns out, one of the machines that caught West’s eye is none other than the latest in Lamborghini SUVs. A couple of months back, we learned that the Lamborghini Urus would be the brand’s new attempt at cracking into the SUV market. It seems like the platform is off to a hot start!

So what is it about Kanye’s new Lambo that sets it apart from the pack? Well, it seems like he’s decided to take more of a flashy approach to the new SUV. Outside, we’re greeted by a matte finish. In what looks to be a wrap, the Urus has taken on a sort of off-white coloring. It seems like the unlikely color almost makes a statement with its subtlety. Inside, a drastic contrast is found as it looks like Kanye has elected to go with a bright blue color. It really seems to pop when compared to the outside of the truck that seems to have the tone of the desert.

Last but not least, we absolutely have to say something about the wheels. Kanye’s art, over the years, has seemed to take plenty of attempts at brushing up with the future. The dinner plates found beneath the Lambo almost seem to be an ode to the babymoon trend with a modern flair. I’m sure that the SUV will certainly have comment sections raging in disagreement. We have to say, though, that the exotic seems to be so very “Kanye.”

Below, we see the Urus along with one of Kanye’s typical heated discussions with paparazzi. Photo – jack raak backgrid 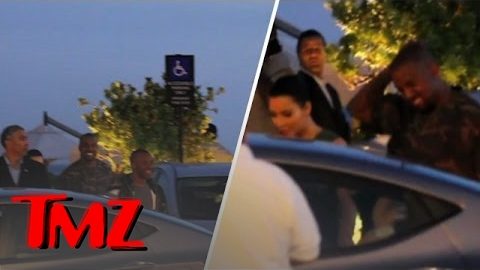