Kayaking Inside an Abandoned Ship… The Engine Room is Amazing! 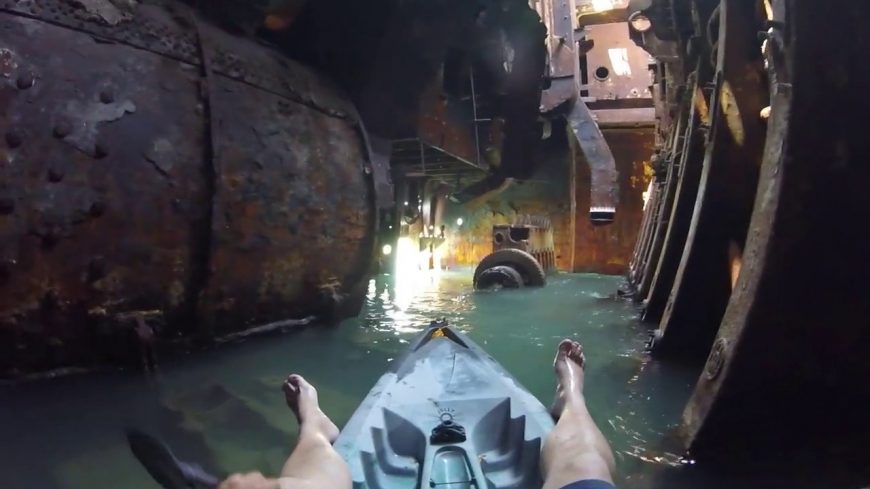 Around the world, there are countless abandoned structures that are just sitting, left untouched for years. This time, we check out a brave kayaker who has his sight fixed on an abandoned ship and decides to go inside to see what’s there. It’s pretty crazy to see a sunken ship like this because normally, when you picture a ship of this magnitude sinking, some dramatic Hollywood special effects come into your head, imagining that the whole thing has gone down and will never be seen again unless you have some scuba gear handy. However, with the way that this ship sunk, this man is able to explore it on his kayak.

Every single way that you turn, it looks like there is tetanus just hanging out and waiting to be inside your body so we’d recommend keeping your limbs inside of the kayak at all times. However, if you look closely, there’s definitely some neat things to behold as it looks like the ship was just functioning one moment and the next, it was going down, never to be touched again by salvage teams or anyone else for that matter. It’s pretty incredible to see how something like this would just simply left for dead after it went down.

Follow along with the video below as this kayaker makes his way through the abandoned wreckage and shows us exactly what he saw on that day thanks to his GoPro camera.  There’s just something that’s so mystical about these abandoned places that really draw in and your attention and force you to watch all the way through. Personally, I have to say that I went back and watched the more interesting parts of this video a second time.

« Tony Schumacher has a massive explosion in Indy