by Jesse Kleib | May 19, 2020
kevin harvicknascarracingwins

Ladies and gentlemen, we’re back to racing! NASCAR has decided that it will ...

Ladies and gentlemen, we’re back to racing! NASCAR has decided that it will kick back off once again, getting back to competition without the presence of fans. Drivers would head to Darlington, South Carolina to try and get back in the swing of things.

Coming into the weekend, Kevin Harvick led the pack as NASCAR’s points leader. Harvick entered the season tied for second in odds for the championship. In Darlington, the race seemed to be Harvick’s to lose. Early on, Jimmie Johnson poised himself as a strong competitor but ended up making a silly mistake that we’re sure had him kicking himself. As he was just a couple of hundred feet from the win in stage 1, Johnson pushed too hard and wrecked his car beyond repair.

Drivers in the field seemed to be battling with loose wheel issues throughout the race. There was also a point in time where an advertising banner managed to tear off of the wall and wreak havoc. The banner covered cooling ventilation systems on several cars and managed to throw off aerodynamics as well.

The piece of vinyl would be passed from car to car as drivers tried to maneuver to lose the piece of debris. Eventually, a caution would slow the race to remove the debris. Harvick would put a gap between himself and second place when things went back to green. He would take the checkered flag by a sizable margin.

The finish of the race was rather uneventful which most drivers still in the race were likely happy about. It was definitely a nice dip of the toes into the water to get us back on track with NASCAR.

This was the first race of 7 between NASCAR’s different series. The next cup series race will be held this upcoming Wednesday. Things are set to get underway at 7:30 pm on FS1.

Revisiting Some of NASCAR's Most Off-The-Wall Repair Jobs 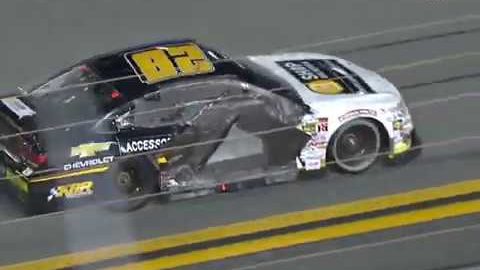