We aren’t sure how exactly you classify this level of terrible luck, but we can’t deny there’s a lot of stupidity that goes along with it to bring this awful luck into existence. This is exactly what happens when your foot outperforms your brain and you end up not only taking out your $280,000 car, but wiping out the six-figure ride of a completely innocent motorist at the same time.

That’s what you’re about to witness if you scroll down and hit the play button on this video, shared with on Facebook by our friend Clifton Caudle. It’s not Clifton’s footage I don’t think, but simply the share that got the most attention yesterday as the video quickly went viral across all social media platforms.

The driver of the McLaren, in which we are riding at the beginning of the video, seems to just be looking to roast the rear tires as he cruises past the Audi sitting parked against the curb in the opposite lane. However, as you will see, things don’t go at all according to plan as the McLaren 720s decides to take a turn to the left. As you may remember, that’s where the gorgeous red Audi was parked, and in a matter of milliseconds, everything went from fun to FUBAR’d as the McLaren slammed into the Audi’s nose with a sickening crunch.

The occupants of the 720s seem to be uninjured as they scramble from the wreckage to survey the damage. I do have to admire the fact that they did head over to the Audi to check on it first, that they at least were concerned about the other car and any occupants that may have been inside at the time of the impact.

Both cars appear to have some pretty serious damage, but it’s hard to tell the full extent of the damage from this short clip. Hopefully everything can be repaired or replaced without setting the owners back a ton of money and these two cars can return to the streets, hopefully with a little wiser driver behind the wheel.

Kid wrecks mclaren into new R8!!!lmao at the SUPREME Sticker 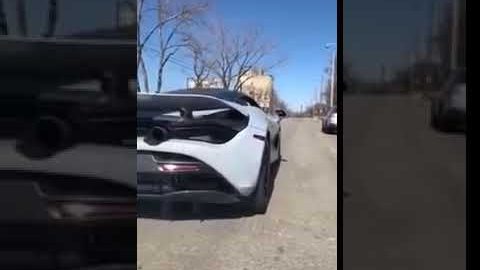