The Kids Can Help Put In Work Now With This Awesome Mini Cat Dozer! 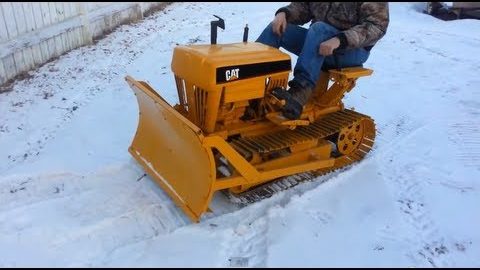 Your Not a badass until you have one of these Cat Mini Dozer. This guy built this homemade Mini Cat Dozer from a bunch of old Lawnmower parts. You have to agree this is super cool and we all want one badly. But only a real badass gets off his lazy boy puts down the beer and actually does something with his life.

The Real current D11T was introduced in early 2008 and is also 850 hp (630 kW). This comes as a regular bulldozer and a carry dozer like the previous model. As with the D11R, the D11T Carrydozer can push 57.9 yards (52.9 m) while the regular D11T can push 45 yards (41 m) of earth. A new D11T was on display at the Caterpillar display at Minexpo from the 22 to 24 September 2008 in Las Vegas, Nevada.
The D11T and D11T CD are both powered by the CAT C32 engine with ACERT technology.[1] Another difference between the D11R and the D11T is the controls inside the operator’s cabin. Several levers have been changed into electronic switches, and several controls have been moved for increased visibility. Another difference is that the D11T has its exhaust mufflers moved back closer to the front of the cab like the D10T. They stand taller than the ones on the D11N/D11R.