Posted by: Jeremy Patterson on November 5, 2017 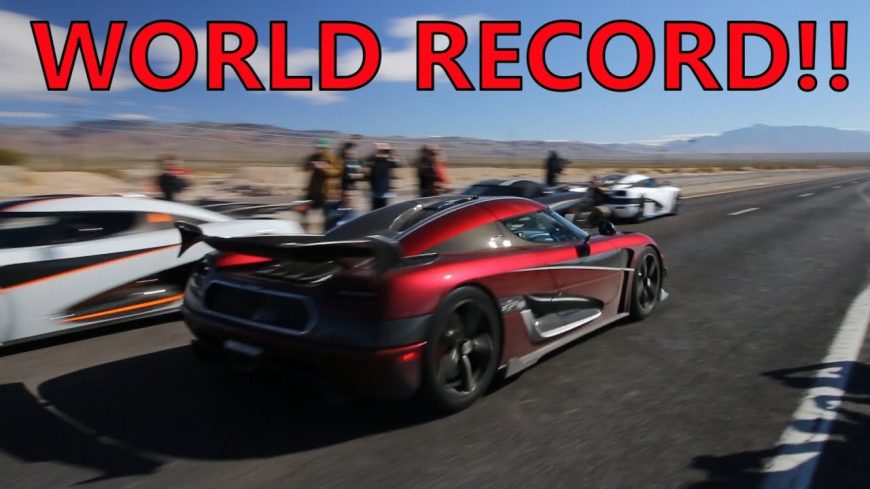 There’a new Hypercar king in the automotive world, and the crown belongs to someone other than Bugatti now. That’s right, ladies and gentlemen, Koenigsegg has taken the title, and done so in convincing fashion.

With 1,140 horsepower on tap and a slippery profile that lets it punch through the air a little easier than the Bugatti, which is also a bit heavier, the Agera R blasted across this expanse of desert highway at 285 MPH on one set of Michelin Pilot Sport Cup 2 tires, a few ticks faster than the Bugatti Veyron Super Sport which previously held the top end record.

The Agera R is actually not the highest-output model in the Koenigsegg lineup, with the incredible One:1 cranking out 1,341 horsepower while tipping the scales at 1,341 kg, giving it a 1:1 horsepower-to-weight ratio, as well as it’s name. However, the decision was made to have the Agera R make the run at the record, and all the pieces put into place to make it happen.

While they had the car out and were breaking records, they figured why not take shot at the 0-400 km/h-0 record as well, previously held by… well… the Agera RS! They had set the record about a month ago by going zero to 400 km/h and back to zero in 36 seconds, but there had been a bit of moisture on the roadway that caused the RS to spin a bit through the middle gears. With this run being made in the desert, there’s little chance of moisture and a might higher chance of broken records.

With an insane time of just 33.87 seconds, the Agera R reset its brother’s world record, as well as setting the record for the highest speed ever recorded on a public roadway, all in one afternoon spent in the desert. While we don’t want to rain on Koenigsegg’s big day, we do have to point out that a certain Hennessey hypercar just might be looking to supplant the new king soon, so hopefully this is just another battle in the war for the crown of the king of speed!

Posted by Racelogic on Sunday, November 5, 2017