Last weekend, following the huge turnout and response to the Bristol No Prep event ...

Last weekend, following the huge turnout and response to the Bristol No Prep event episode, Discovery Channel took the show west and rolled into Tucson Dragway for another race with a nice fat check for the winner. With another huge group of stars from the show as well as some of the biggest names in no prep racing on the property, that $40,000 check would certainly be earned, with the winner almost guaranteed to have to take out some heavy hitters on the way to the win.

A big part of any no prep race is the call outs and grudge races, where any racer can call out another competitor for a race. They usually run for some money, but sometimes they just throw down for bragging rights. Either way, nobody wants to take an L, so whether it’s for some cash or just for pride, you can count on both cars to give it all they have.

One of the most hyped grudge races at the Tucson event was David “Bird” Jones in his newly wrapped Trans Am tangling with Kye Kelley in his Shocker 3rd Gen Camaro. Most of us know Kelley as the host of Street Outlaws New Orleans, and if you watched every episode, you may recognize Jones from an appearance or two on the show as well. Both of these F-Bodies are nitrous injected big blocks with massive engines and a ton of spray on board, meaning this should be a good side by side race on paper if they both make the trip from start to finish.

As soon as the green light flashes, the cars leave together and deliver the close race everybody was expecting. Welded together when they pass the camera, the cars streak toward the finish line, where the win light comes on in the right lane, indicating that Jones had crossed the stripe first. It looks like Kye may have had to roll out of the throttle at the top end, but it’s hard to say for sure from the angle of this video. In a race this tight, that could definitely have made the difference. Congrats to “Not Birdman” for taking down the Shocker! 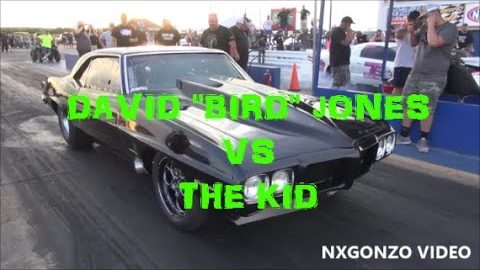