2018 has started off fast for the past series Champion, 6 top 5 finishes in 8 races this season, including back to back wins, and two 2nd place finishes, and one pole position, coming into the race Busch had been no lower than 3rd place at the finish of a race since finishing 7th in the second race of the season February 25th, at Atlanta motor speedway, the win is Busch’s 8th victory at Bristol, and 45th of his career.

Kyle Larson had what appeared to be the car to beat all day Monday, after spinning while leading he managed to come out of the pits in 3rd place, but a bad restart shuffled the young driver back out of the top 5. Larson worked his way back up to the lead, but while out in front by over 6 seconds a late caution came out when former Champion Brad Keselowski got into the wall. Larson would lose the lead following the restart, and finish 2nd. He led 190 of the 500 laps.

Coming home 3rd was Jimmie Johnson, in what is the former 7 time series Champions best finish of the season, Johnson never led, but managed to stay out of trouble, and drove his way

Ricky Stenhouse Jr. Finished 4th in what might be the best performance of the weekend, after an unfortunate incident midway through the race left him with a beaten up, and damaged race car he fought his way back through the field, even with a penalty on pit road. Though he never got the lead in the race, Stenhouse appeared to be one of, if not the fastest car on the track. 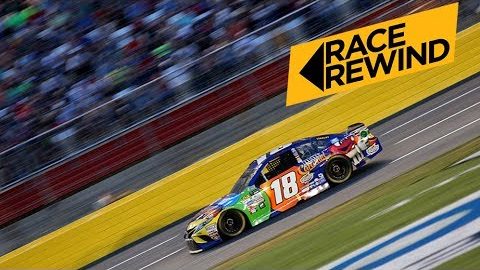