Larry Larsons Truck is the FASTEST Street Legal Truck Ever!

by Jeremy Patterson | May 27, 2017
drag racingtrucktrucks

Larry Larsons Truck is the FASTEST Street Legal Truck Ever!

Drag Week legend and longtime street-legal drag racer Larry Larson showed up for a little test session at Ozark Raceway Park to test out the new FuelTech FT600 and his new Billet Atomizer fuel injectors, Larson found out from Kyle at 1320 Videos that the track was running a heads-up street legal race, which Larry’s S10 just happened to fit the rules for. Since he could get a few extra passes in to refine the FuelTech tune and have some fun running heads-up, Larry decided to jump in the race.

After prepping the gorgeous pickup in the pits, Larson headed to staging to for the first round, where he lined up with a Chevy station wagon. We’ll go ahead and state now for the record that, while it fit within the rules, Larson’s truck was not exactly what the track had in mind when they put together the rules for this shootout, which was aimed to draw more stock-style cars. However, the truck was legal for the class since it is totally street drivable and is tagged and insured, so Larson basically brought a Barrett .50 Cal to a knife fight. Larson’s boosted S10 launched hard and, despite having to roll out of the throttle, his 1.02 sixty foot was still enough to get him to the finish line first. Up next, Larry faced off with the big block Ford-powered wooden rat rod we featured yesterday, and on this pass Larson would lay down his quickest 60′ to date in the pickup, an otherworldly 0.997.

Moving on to the finals, Larson would make his cleanest pass of the day to take the win against a turbocharged fox body Mustang. While the clocks were off for the event, Larson showed his time slip, revealing the truck laid down a pretty solid run, tripping the 1/8th mile clock in 4.17 seconds at 164 MPH. With a soft tune and low boost dialed up, you can imagine what Larson’s truck can do when he leans on it, and now you understand how it’s the quickest street legal vehicle on the planet. 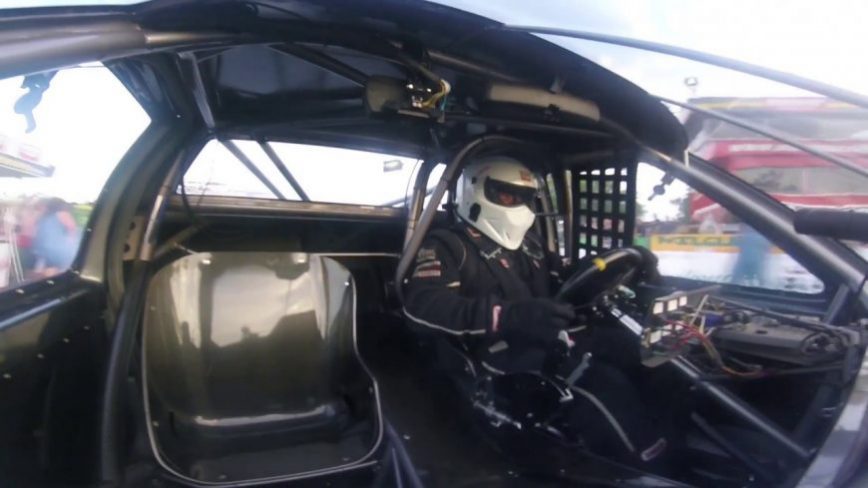