In this day and age, they swap just about every engine into every platform ...

In this day and age, they swap just about every engine into every platform conceivable. Whenever you hear about something that seems a little bit too far-fetched to be true, you really have to wonder exactly what you can immediately write off as being a gag or a troll because today, it’s all too common to see uncommon engines under the hood. However, this time, we check out something that maybe takes the concept a little bit too far beyond belief. However, it’s one of those things where you have to really question if somebody would do this or not.

Yes, this time, it is, in fact, an elaborate troll trying make you believe that a lawnmower engine was stuffed under the hood of a minivan. As it turns out, the popular Honda channel by the name of BoostedBoiz is doing a little bit of work to their Honda Odyssey, perhaps beefing it up a little bit so that it’s more than your mom’s minivan. However, in between the engine swap, when the van just so happened to have an empty engine bay, they took the time to jam an entire lawnmower into the machine to try and make viewers fall for the idea that the van was lawnmower powered.

You can call it clickbait or a troll or whatever you’d like, but we feel like this lawnmower prank is a pretty ingenious way to tease viewers. While this van isn’t necessarily actually powered by a lawnmower, I wouldn’t be surprised to see somebody take on that project and bring it to life. After watching how they put the troll together, I wouldn’t be shocked to find a good amount of folks on YouTube actually falling for the idea that this minivan is powered by a lawnmower. Follow along in the video below to see how elaborate the scheme is for yourself.

Honda CRX - VTec Kicks in and BLOWS CAR UP!!! 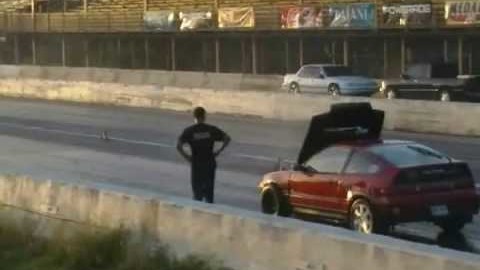