Leah Pritchett in a Challenger vs. Papa John in the Camaro! charity race

Leah Pritchett in a Challenger vs. Papa John in the Camaro! charity race

Leah Pritchett has kicked off the 2017 NHRA Top Fuel season with a bang, taking home ...

Leah Pritchett has kicked off the 2017 NHRA Top Fuel season with a bang, taking home wins in two of the first three events, setting the national ET record, and stepping directly into the spotlight as the woman to beat so far this year.

Her outstanding performance behind the wheel of the Papa John’s Top Fuel dragster isn’t the only amazing thing about the talented young driver’s 2017 campaign. Leah stepped out of her 330+ MPH rocketship-on-wheels and slid behind the wheel of a Dodge Drag-Pack Super Stock Challenger to take on Papa John himself, Papa John’s founder and CEO John Schnatter in his beloved gold 2nd gen Camaro in a charity race at last weekend’s Gatornationals in Gainesville, Florida. Despite having a car capable of running with Leah’s Challenger, Papa John was late off the line while Pritchett nailed the tree and jumped out to a huge lead and turned on the win light.

With smiles all around following the race, the clear winner was the Infinite Hero Foundation, which received a check for $20,000 from the event. With Papa John having lost two in a row to Leah, look for him to step up his game, as he’s surely more determined than ever to kick Leah’s butt! 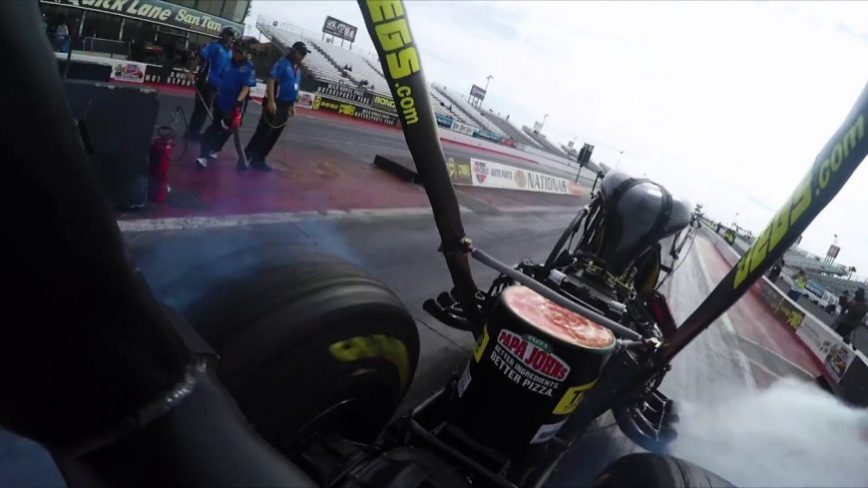