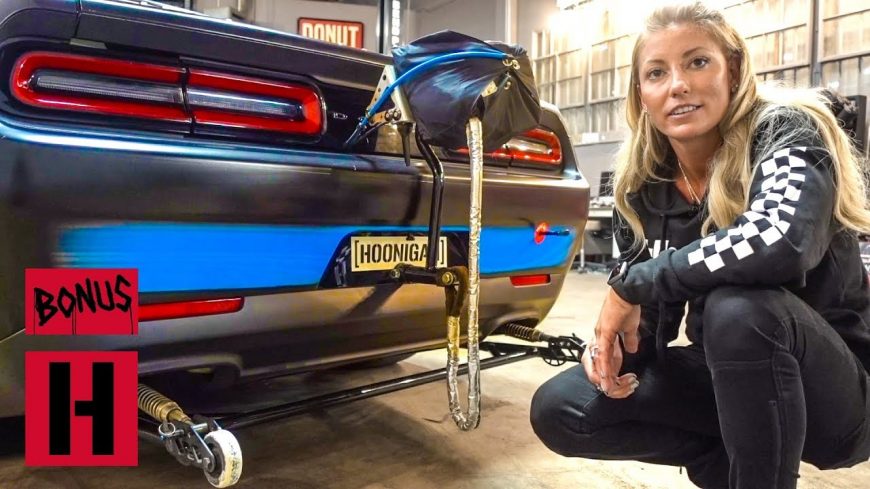 Just a couple of weeks back, we all got a very intimate look at Leah Pritchett’s world championship-winning Dodge/Mopar Drag-Pak Challenger known affectionately as El Bandito. Not only did the car carry Leah to her first class world championship, but it also ended the season on a ridiculous 12-round win streak and is currently the quickest car in the NHRA’s Factory Stock Showdown.

During the initial Build Biology video from the guys at Hoonigan, we learned a lot about the car, much of which was previously kept somewhat of a secret. From the body and chassis itself, which is actually the very first Drag Pak Challenger ever built, to the engine and the suspension underneath, we checked it all out with the Hoonigan crew, Leah herself and her world-class crew chief and tuner, Kevin Helms.

There was one minor detail that wasn’t really discussed in great detail, and that’s the wheelie bars. They were mentioned and discussed in the first video, but in this bonus footage, we learn a lot more about them and what goes into getting them ready for a given pass down the track. For example, not many people would know that each individual track, while seemingly identical to the others, has its own characteristics, bumps and other factors that necessitate the wheelie bars be adjust each week.

Something else casual fans may not have realized is that the height of the wheelie may be limited by the wheelie bar, but that in nearly every case, the amount of height the nose achieves on a given run is actually mandated by the front shocks. I know that most of you hardcore racing fans probably know that, but newcomers to the sport might not realize that. The wheelie bars are only there to as a “last resort”, because things don’t always do exactly as anticipated.

We also get to take a peek inside the trunk, where we find boxes of NHRA’s iconic Wally trophies, including one from the US Nationals, where we were on hand to share in Leah’s first victory in FSXX!