Many times, for most fans of racing, the only moment that’s the most visible is ...

Many times, for most fans of racing, the only moment that’s the most visible is the big payoff.

When we watch some of the biggest names in racing rocket their way to victory, we can’t help but think of how glorious such a moment is. This might encourage some to think that these guys have it easy. All they have to do is get behind the wheel of a racecar and pound the throttle to victory, right?

Well, as it turns out, nothing in life is really that easy. Behind the scenes, there is so much going on that a lot of fans probably never really get the chance to see. It’s not necessarily their fault, either. It’s just not a side of racing that is really all that highly publicized.

However, in the age of YouTube, we get to really dig into what it takes to operate a racing team. With channels like Justin Swanstrom’s, we get to see the less known about side of high-level racing.

Swanstrom has really seen it all. From wrecks to unforeseen mechanical issues and even an explosion or two, he’s really fought through some adversity.

By following along with the video below, we check in with Swanstrom as he makes his way through yet another test session. It’s in moments like these where races are really won. Sure, being able to execute on race day is going to be a big part of it. However, the nerves and ability to do so are all developed when no fans are in sight. 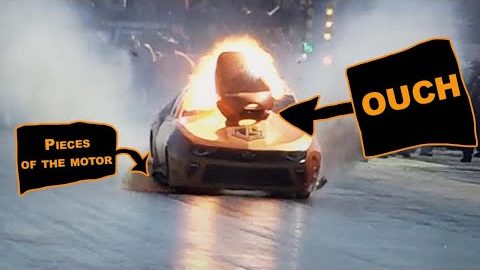