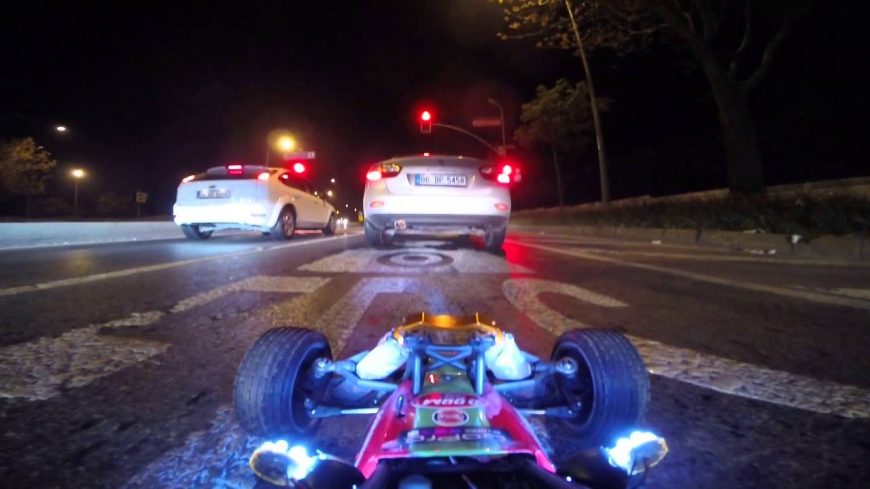 When we see some videos posted on the web, you can’t help but ask “why?”

With a video like this, the question should be more along the lines of “why not?”

Let’s set aside the idea that this might be just a touch distracting for the other motorists. The display that we see here looks pretty cool as a remote control car is sporting some serious lighting. It shows this off by riding its way through a sea of people who are probably curious as to what the heck is going on beneath their cars.

This is definitely something that you don’t want to try at home. However…. HOW COOL IS IT!?

This time, we take a ride in some heavy traffic at night, nothing new until you consider the point of view that this flick is shot from. Instead of taking a traditional viewpoint from another car, this one is filmed way down low. It’s a remote-controlled car mounted up with a GoPro camera or something like it. All adrenaline aside with the rush that this RC enthusiast is probably getting, we get to see the best seat in the house. This one that you might never see again as this certainly isn’t something that’s all that common. The video from Abdulkadir Enes can be seen below!

Check out the clip below as the car captured some heavy traffic from the ground level. This one certainly takes a dose of bravery, as well, because, with one false move or an angry motorist, this remote control car and camera combination could be a goner!

Luckily, that just isn’t the case here. The operator has some pretty good skills behind the controls. Thankfully, it looks like luck is on their side when they chose to go out and film this high-intensity display. We’d bet that this one will have some begging for more! The RC car really lights up the night!

« Camaro Jacked Up To The Sky, Transformed To Off-Road Machine