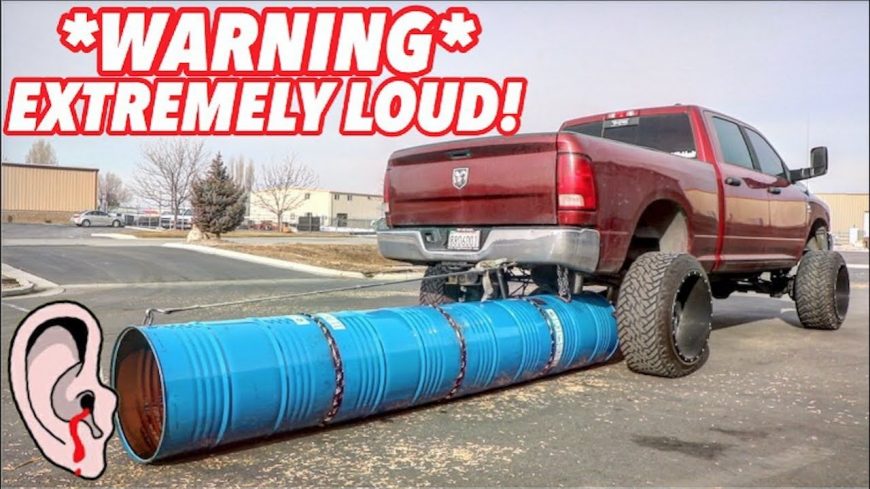 Over the years, there have been some pretty funky automotive modification trends that have come and gone. Just think back to the early 2000s when everybody was raring and ready to slap neons on their car with a massive aluminum wing from the local Pep Boys. Yeah, that was something that was actually cool and not in a sarcastic manner, either.

More recently, it seems like the younger crowd has been drawn to hanging massive exhaust tips on their diesel trucks. It seems like it’s a mixture of wanting to get the best possible sound out of the truck along with adding something that they think looks cool.

In various YouTube videos along the way, we have stumbled across some folks who take this concept to the absolute extreme. It’s wild to watch as they create what we’re quite sure are parodies of the folks who like to mount exhaust tips on their trucks that might just be a little bit bigger than what most would expect. This time, we get a lot more of the same with perhaps the most extreme exhaust that we’ve ever seen. No, this isn’t just some aftermarket piece manufactured in bulk but instead, something that’s custom-made and maybe… shouldn’t have been.

By following along with the video below from the Bug BMX YouTube channel, you’ll be exposed to an experiment that won’t be able to be unseen. As this YouTuber wanted to please his audience, he decided that welding together a bunch of 55-gallon drums and attaching it to his truck as an incredibly long and large-diameter exhaust would be a fun concept. In fact, we did have a lot of fun with this video because we can certainly see somebody doing this outside of the purpose of entertainment or a quick gag video.