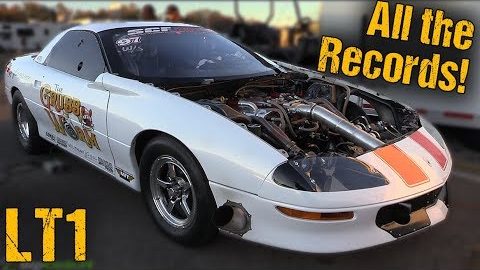 The Tick Performance guys are at it again! Their LT1 powered Grubb Worm Camaro has quickly become the authority in RWD stick shift racing. We get the feeling that this is just the beginning.

It was about a month ago that we would watch the overall General Motors stick shift record fall. Before the pass from the Grubb Worm at FL2k in October, LS power had dominated the landscape.

The record chasing had begun to heat up around 2015. Ray Bulach shifted his LS powered Camaro to a mid-8-second pass which seemed to set the internet on fire. This GM stick shift record would continue to be trimmed down by Ray and would be passed around a bit over the last couple of years. LS powered rides would toss the record back and forth until Jonathan Atkins and Tick Performance stepped into the race.

With a heavy foot, the car was able to riot to a 7.82-second pass in Florida last month. This really set the community ablaze at the time. I’m not sure that there were too many folks outside of Tick that would’ve bet on the LT1 throwing its hat in the ring for a record. However, the crew has managed to not only compete with the LT architecture. Instead, they’ve absolutely blown just about everybody out of the water. A substantial margin now sits between the Grubb Worm and second place.

In this world, everything has come down to hundredths of a second. There have been plenty of teams that have been battling to break the 7-second barrier who can attest to the fact that every fraction of a second matter.

Breaking the record with a 7.82 would attest to just how much every fraction matters. This pass was superior by less than a hundredth of a second. Shortly after, though, Tick went all the way in, proceeding to shave over half of a second off of the pass, mustering a 7.30-second flat pass. When we caught up with Jonathan, he tells us that some adjustments had been made to help the car get out of the hole easier. He continues that he didn’t have the expectations of the 7.30, though. The conditions at the Import vs Domestic World Cup finals seemed to be a key catalyst in the performance. Grubb Worm would go on to the finals at the event. This came before battling clutch issues and a strong field that would have them fall in the final round.

It seemed like the barrier to break into the 7s took just about forever. Now that a handful of RWD stick shift machines have been able to make their way to the 7s, it’s probably only a matter of time before the 6-second range is tapped into.

As far as overall records go, the Red Demon Eagle Talon is the current quickest H-pattern vehicle. As far as we know, the car’s best amounted to a 7.04-second pass. Ladies and gentlemen, it looks like we have ourselves a good old fashioned 6-second bounty brewing for 2020. The plot twist is that it might just be claimed by technology that’s been retired for over 20 years. – BigKleib34