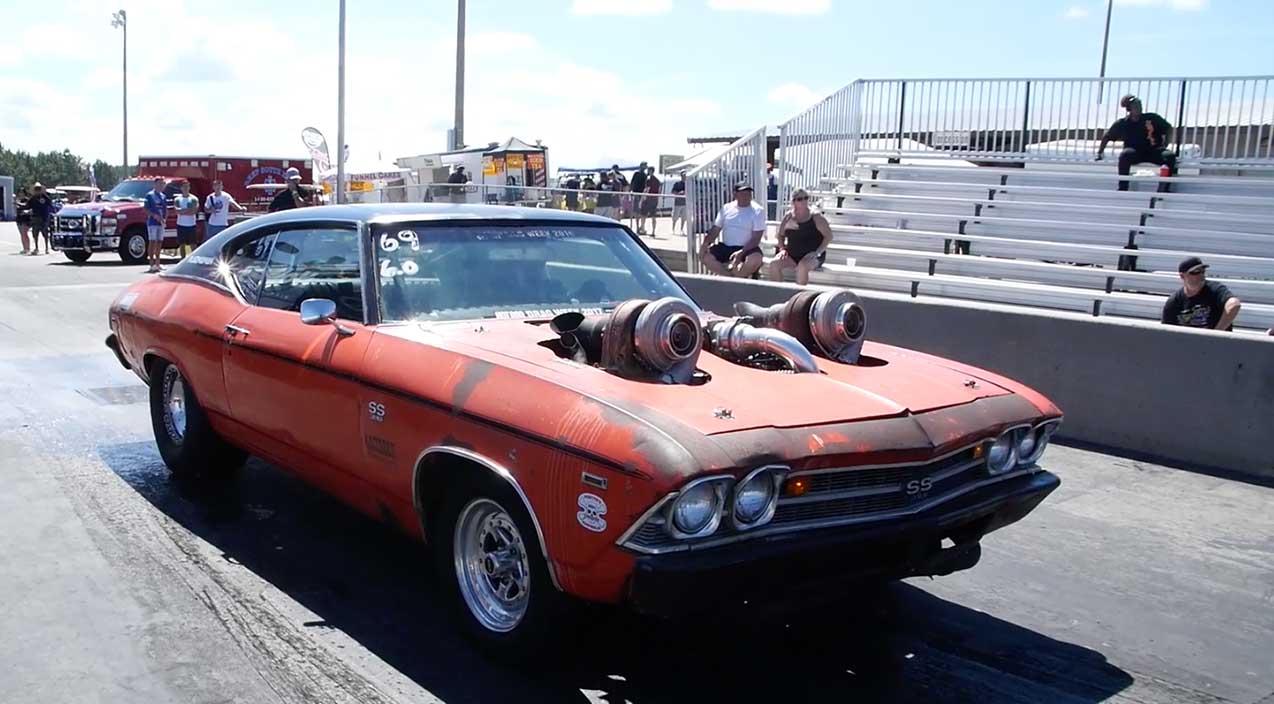 One of the things I like most about turbo systems is that you can spend a little extra time and money planning your build and keep everything tucked neatly under the hood. Some intakes may require a small cowl hood be swapped for the stock one, but in most cases, that’s all that is required.

And then, there’s the literal opposite approach that some gearheads take when it comes to putting their forced induction system in place, and to be honest, that’s often way cooler than a super clean install. For proof, look no further than this twin turbo Chevelle, a car that looks like it drove straight off the set of Mad Max and into the gates at South Georgia Motorsports Park for No Mercy 9.

The car, a barn find that has been upgraded, somewhat, in the powerplant department. Gone is the original 396 CID big block and in it’s place, a twin turbo big block with the snails sticking way up out of the hood in an absolutely asinine display of awesomeness.

The team who put the car together actually built it for Drag Week back in 2016. With little more than 3 weeks to assemble the car, they managed to successfully complete the grueling week-long journey and put up an average ET of 8.95 seconds on the quarter mile tracks along the way, impressive numbers for a very much stock Chevelle without a ton of money dumped into the project.

Now they’ve brought the car back down south to SGMP to run No Mercy 9, and our friend Justin at JMalcom2004 caught the car from every angle as it blasted down the super-sticky 1/8th mile. The driver laid down a gorgeous smoky burnout, the lined up and brought the engine up on the two step to build boost. As the tree flashed, the car was away, putting up a solid 6.00 elapsed time. That may not seem like earth shattering numbers, but you have to keep in mind that this car can be driven back to the hotel each night, with a driver and a couple of passengers if they wanted to do so. That’s certainly impressive in my book.

« Clay Millican Ends Round 1 With A Massive Explosion