For those who don’t know, which included us until we saw this video, a ...

For those who don’t know, which included us until we saw this video, a velomobile is basically a bicycle with an enclosed aerodynamic fairing to help reduce drag and provide some protection from the elements and possible collisions. While they look like a tiny bullet-shaped car, they are not required to be registered due to the fact that they are human powered like any other bicycle you find on the roadway.

The rider of this particular velo was cruising down the streets of San Diego when a SDPD officer pulled him over. While other videos on the guys channel show some more contentious interactions with the cops, this officer was excellent to deal with, showing a genuine interest in the fairly rare ride and keeping the stop short and to the point without being rude. In his other videos, the rider seems to almost be trolling the cops, trying to catch them on camera saying or doing something wrong or inaccurate, but this officer handles the situation perfectly, even laughing at the guy’s attempt to crack jokes.

Upon realizing that the velomobile is in fact pedal powered, the officer has no further issue and sends the guy on down the road with an unrequited “Have a good day.”

If you’re going to ride around in a contraption such as a velomobile, you have to know most people aren’t going to know what it is when they see it, even the trained officers who are inevitably going to pull you over to ask questions. A velo looks like it should be powered by an engine, so when they don’t see any type of license plate in place, it is the officer’s duty to initiate a traffic stop to investigate. While it certainly is their job to know the law, it is impossible for them to know the configuration of every one-off vehicle they see traveling down the road, especially ones that are as uncommon as this.

Cop Pulls Over Member of a Biker Gang in San Diego! 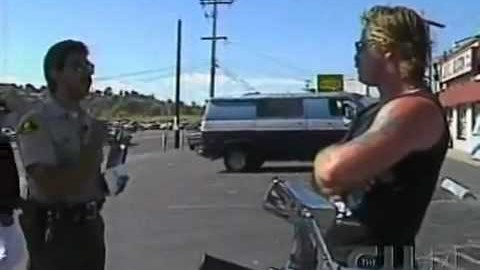