Man with a death wish ducks under speeding train 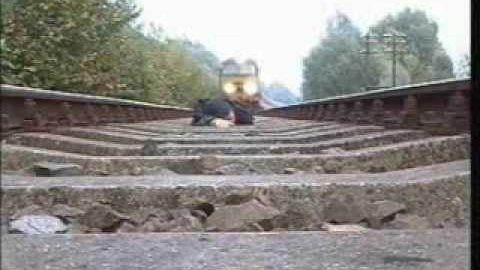 There are some people out there that really choose to live their lives on the edge. We get that there are a lot of folks who will push the limits, but even those people look at this group with wide eyes and wonder what the heck is going through their heads in stunts like this.

When nothing else could seem to live up to the adrenaline needs that this guy built up, he would take on a speeding train with the attempt of letting it roll over him all while he survived to tell about the matter.

In the name of getting his fix, this guy toyed with death as he headed out to the local train tracks, laying down in between the tracks to let the next oncoming train run over his limp body while getting the entire thing recorded on his nearby camera.

We can’t really differentiate between this being a rush and being completely stupid beyond all reason but the guy certainly does carry it out without a second thought. Frankly, I’m not sure how his massive balls managed to fit underneath of that train rushing by just feet above his head!

Check out the video below that shows the train coming just inches from taking this guy’s head off. We REALLY wouldn’t recommend that you try this one out at home. Just imagine if the train that came down the track was a different model with less clearance!

« 24 of the most satisfying ship launches ever recorded