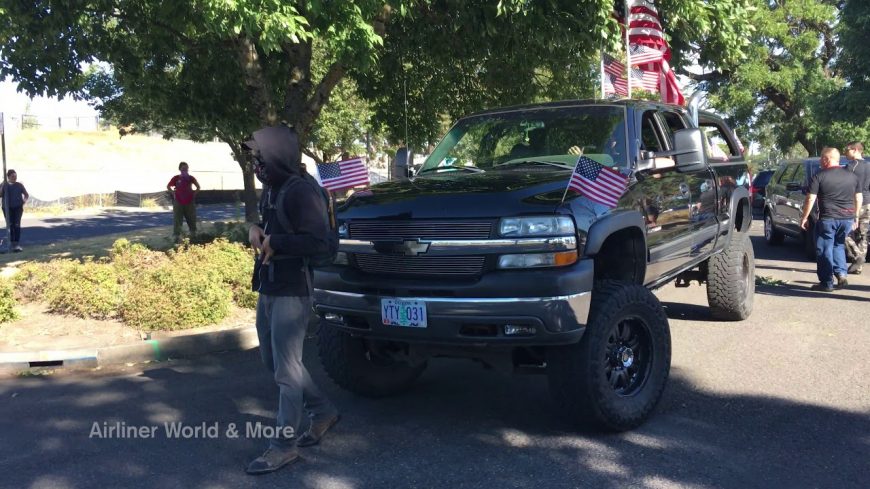 Here in America, we are afforded lots of rights that really make this country great to live in. Just as much as somebody has the right to protest, someone else has the right to disagree with the protest. With all of our different viewpoints, the country can really be a productive place to move forward, however, there definitely is a right and a wrong way of going about voicing your opinion.

While protesters definitely do have the right to go out there and peacefully use their voice in the streets to get their point across, blocking traffic is downright stupid. Not only are you impeding people who have somewhere important to go and who could possibly be in an emergency situation but you’re also putting yourself in danger.

In this situation, we catch up with the protesters who thought that it would be a good idea to block a big old diesel truck and it creates a really awkward situation. The masked man here who is said to be a member of ANTIFA slowly walks in front of the truck, stopping it from leaving the parking lot as the driver continues to drive along behind him, patiently waiting for the person to get the heck out of his way. When the opportunity arises, the diesel truck riots off into the distance as the person on foot attempts to give chase. It’s not clear what they plan on doing in the case that they eventually caught up but it definitely doesn’t pan out well for the protester.

Follow along in the video down below that puts you on the scene of the incident as these two have a kind of silent battle of wills that ends with the truck getting away and the protester taking the walk of shame back to wherever it was that he came from before the encounter. After you see how this will all unfolded, be sure to tell us what you think of this protesting situation that all seemed to happen incredibly quickly.