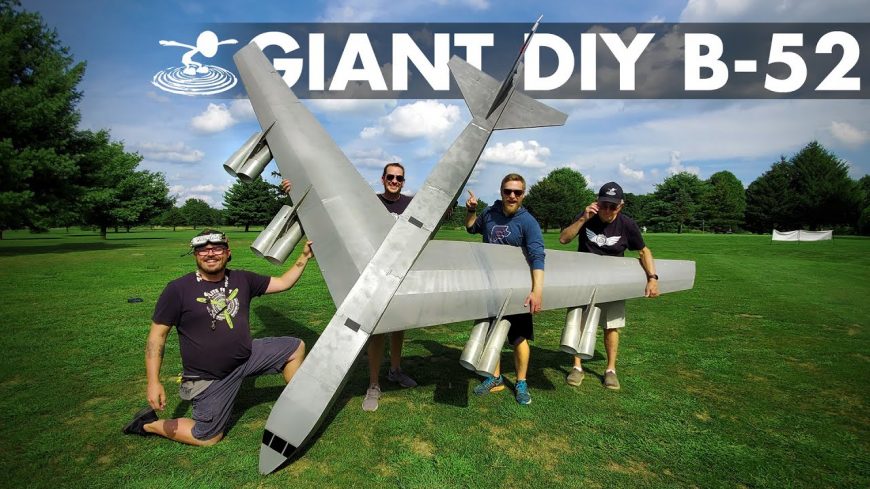 As it turns out, digging into the world of remote control vehicles can be rather expensive. Many wouldn’t imagine this, however, one can end up sinking hundreds, if not thousands, into a single project. On the other hand, though, with a little bit of creativity, anything is possible. In just about any area of life, someone who can be resourceful is going to be saving money. Heck, they might even end up creating a better product at the end of the day as well.

This time, the worlds of being resourceful and remote control surely did collide. We’re not necessarily saying that this one was free. However, if something of this size were purchased, it would have most certainly been incredibly expensive. Instead, we follow along with a DIY airplane that is too cool to deny.

According to the guys at FliteTest, one of their buddies built a wonderful B-52 out of common materials. After bringing it to an event by the name of “Flite Fest,” they left it behind. From there, the body was left in a garage without the most optimal conditions, leaving it to decay just a bit. Weather is unfriendly to certain materials sometimes. However, after a slight revival, the fun was on again.

At the end of the day, we’re sure that there was some investment in parts to make it all come together. However, a custom creation like this really pops right off of the canvas, if you will. We absolutely love watching all sorts of remote control aviation. There’s an extra element of something special when we know that a little elbow grease starts to pay off, though. The fact that is was constructed for cheap adds a bit more flair.

Seeing this thing soar through the sky almost makes us want to head out to the garage and try it out for ourselves! Perhaps the best part is that, with a little bit of practice and patience, we could see anyone being able to conquer a build like this.