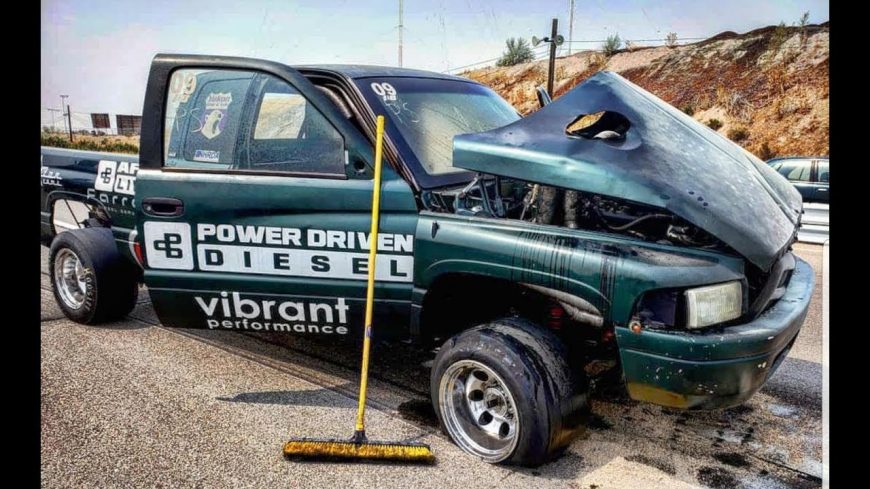 I know it’s tempting to just watch until you see the fireball, but I promise you’re going to want to watch this video all the way to the end. You’ll get a great look at some of the most insane engine explosion carnage you’ve ever seen, I guarantee it.

The world of diesel drag racing continues to grow and evolve as tuners and parts manufacturers find new ways to push diesel performance to insane new levels. Each time we see a new milestone reached or record broken, we ask ourselves “how much more is left” and these competitors and shops always come back with an answer that sounds a lot like “Oh there’s plenty left!”

However, there are times when thresholds are exceeded in pursuit of those record performances, and the higher the horsepower levels, the more spectacular the carnage tends to be. For a great illustration of this, we have some insane video for you from WOTE18 showing exactly what happens when you push a boosted diesel engine past it’s limits.

The truck, campaigned by Power Drive Diesel and Alligator Performance, is a Cummins-powered Ram that sounds like some kind of otherworldly craft as it spools on the line. With boost levels likely nearing, or possible above, triple digits, the amount of pressure and stress on the internal components of an engine like this are off the charts, and as you will see, that manages to find the weak links in the most spectacular way possible.

Not only does the engine give up the ghost in a horrifying fireball, once the camera catches up, we come to find out the block itself was literally split in half.

In fact, so completely destroyed was the block that the camshaft itself can be seen jutting from the bowels of the carnage with the cam bearings still in place, proving just how powerful this explosion was. Luckily the driver managed to fight the beast back to a stop and exit with no major injuries, despite the extensive damage to the truck itself from the explosion.

« Supra Gets Hemi Swap to Push the Limits Even Further!