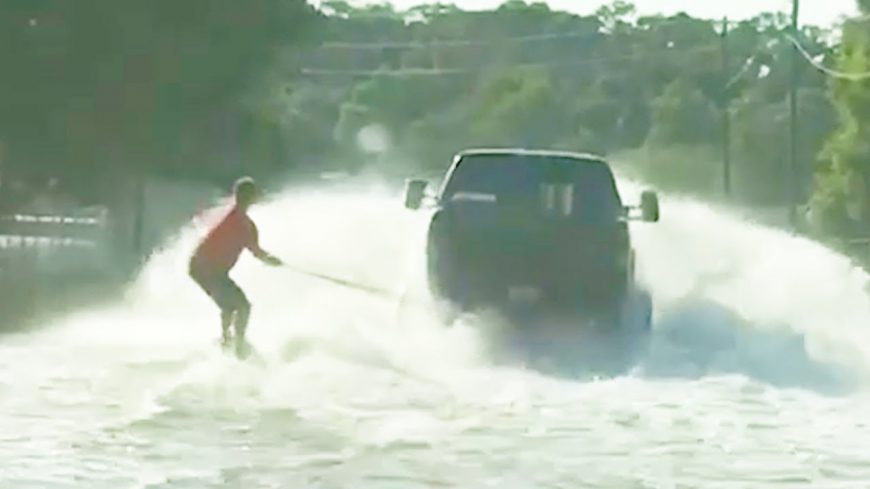 In the face of terrible situations, there always seems to be a group who manages to find a way to make the best of it. Hurricanes especially seem to draw revelers that decide to ride out the storm and make it a party whenever possible. With modern forecasting technology, there is often a week or more notice, giving those who want to leave time to get out and those who are staying time to gather supplies.

The guys and gals in the video didn’t need too much as far as supplies go: a little fuel, some tow ropes and surfboards and they were good to go. These huge trucks had no problem navigating the flooded roadways in and around Houston following the recent rainfall from Hurricane Harvey, and the guys behind the wheel know how to throw down and have a good time. Of course, there was some good deed doing to be done, and the guys spent some time pulling rescue duty and didn’t just goof off the whole time. There are people to rescue from he overwhelming flooding, trucks that have gotten stuck, and plenty of other opportunities to be heroic while still finding time to have fun.

We’d certainly never make light of a situation like Harvey and the devastation it left in its wake, but natural disasters don’t have to be all bad. As long as you are safe and can do so without endangering yourself or others, get out there and have a little fun to lighten the mood. Of course, if the opportunity presents itself, take some time to help those who need help. Luckily events like this don’t happen too often, but when they do, we often get to see the very best of people. There have been countless efforts from all over the nation to help the city of Houston and its residents begin the long process of rebuilding.

« Car Totaled While Being Towed but Nobody Wants to Pay Up