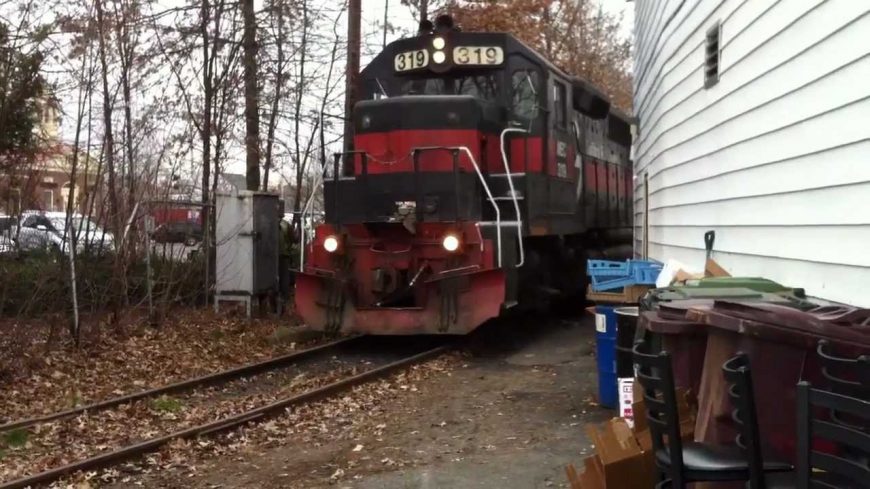 It would probably be quite a nightmare for most to imagine a freight train rolling through their back yard on a regular basis. No, we aren’t talking about train tracks that happen to be near your home to the point where you’re within an earshot and get startled by the train every once in a while, but instead, a train that is literally mere feet from your house. For these people, that situation that does sound rather horrible ends up being the reality as this railroad in Peabody, Massachusetts runs just feet from someone’s home, so close, in fact, that the train has to slow down as to not be a danger to the people inside of the building.

According to the person who posted the video, “These tracks see an average of one locomotive every one to two weeks, as the only local customers are Eastman Gelatine Corporation and Univar USA. There is so little activity on this stretch of track that even some of the locals assume they’re abandoned or exempt: there have been several recent incidents where things like trucks and dumpsters have been left on the track.” However, even though they are rarely used, I would still imagine that the situation could provide a rather large pain in the rear end. That’s just something that I feel like there aren’t too many people who would be willing to deal with.

Check out the video below that shows these enthusiastic train spotters filming the locomotive as a rolls on by nice and slow, making sure that it doesn’t do any damage to its surroundings. If something like this was built right next to your house, would that be enough to make you move? I think that most people probably wouldn’t be too comfortable with a train track in such close proximity to where they live every day. A couple of steps in the wrong direction and that could be it!