Massive Ship “Celebrity Infinity” Crashes Into a dock With Style 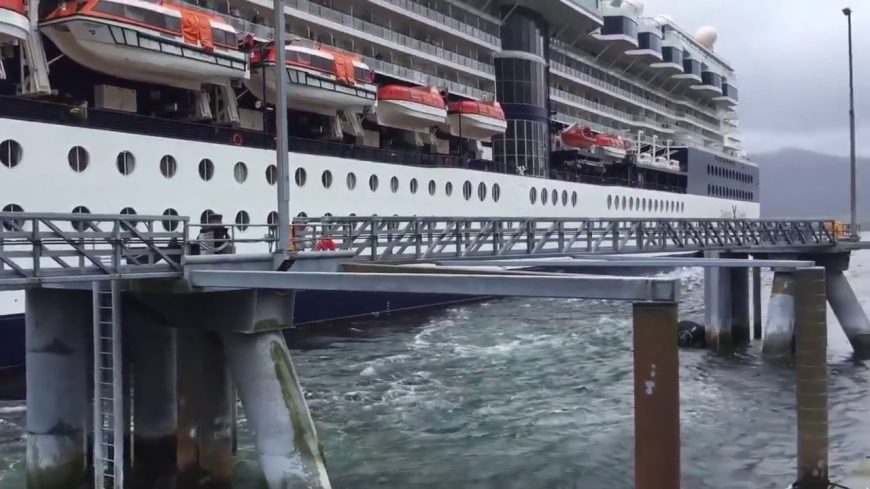 We’ve seen before just how hard it can be to wrangle one of these monstrous cruise liners and bring it safely into port, and this is yet another close up look at just how ridiculously hard that job can be.

This cruise liner, named “Celebrity Infinity” looks to be making a fairly controlled, low speed approach to this dock in Ketchikan, Alaska. However, the woman with the camera can tell pretty early on that it’s not going to end well, likely having watched these ships slide into port before and having a pretty good idea of what the approach should look like. It doesn’t take long, however, to realize the ship, which weighs some eleven thousand tons, is not exactly coming in at the right angle. It turns out, wind gusts of up to 45 miles per hour were hitting the ship from the other side, pushing it hard into the dock during the already-delicate docking procedure. Couple that with the fact that these ships are practically the size of a small town and it becomes pretty obvious why things got out of control.

There was some fairly heavy damage to the ship. Along with some heavy gashes in the hull, there was also a puncture, although luckily it was above water level and didn’t cause water to enter the hull. However, the damage to the dock itself ended up costing between two and three million to repair. Luckily, there were no injuries either onboard the hulking vessel or among those on the dock for the approach. Knowing that these ships are captained by sailors with decades of experience shows just how intense operating such a large, heavy vessel can be. The fact that nobody on board or on the dock was injured is nothing short of a miracle, one we are certain the cruise line is very thankful for.

« Crazy Man Mails Himself in a Box From The UK to The USA and Records The Entire Thing!