Massive Tow Truck Broken Out to Rescue Tundra From the Water

Massive Tow Truck Broken Out to Rescue Tundra From the Water

Let’s just say that hypothetically, you were to drive your truck straight off ...

Let’s just say that hypothetically, you were to drive your truck straight off of the edge of dry land and into the muck. Some might think that, hypothetically, it wouldn’t be all that difficult to retrieve. How much more could it possibly be than hooking up the chain and yanking it out of the water? Well, I guess that that theory might apply in some situations. However, when a truck has been sunken pretty deep, it might just take a little bit more of a heavy hauler to bring it back.

This time, we check out exactly that situation. The unfortunate truck driver on the other end of this one is behind the wheel of a Toyota Tundra. It turns out that the full-size pickup truck drove right off the edge and ended up going swimming. Unfortunately, the truck was about as buoyant as a rock, just like one might expect. It turns out that the rescue still involved some heavy equipment.

In this one, the whole idea is to see just how such a recovery effort might go. As it turns out, some heavy-duty equipment was brought to the scene in order to make sure that this Toyota made it out in one piece. This definitely looks like a situation that ended up getting pretty expensive in a hurry.

By following along with the video below, we’re able to watch the rescue effort. As it turns out here, the experience can come in handy big-time when it comes to removing vehicles from the drink.

This isn’t the first time that we’ve seen an aquatic rescue. There are some guys who do this all day, every day. We never know what kinds of treasures they might find. In videos like this one, we see that their adventures start much deeper in the water. 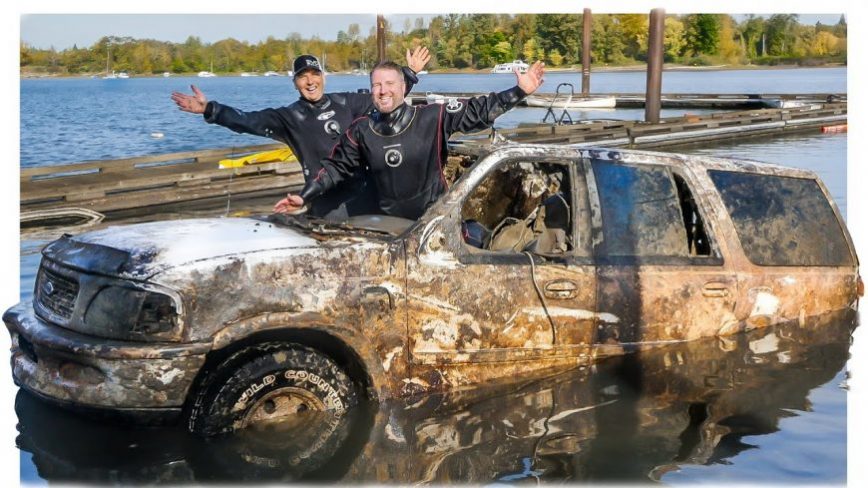