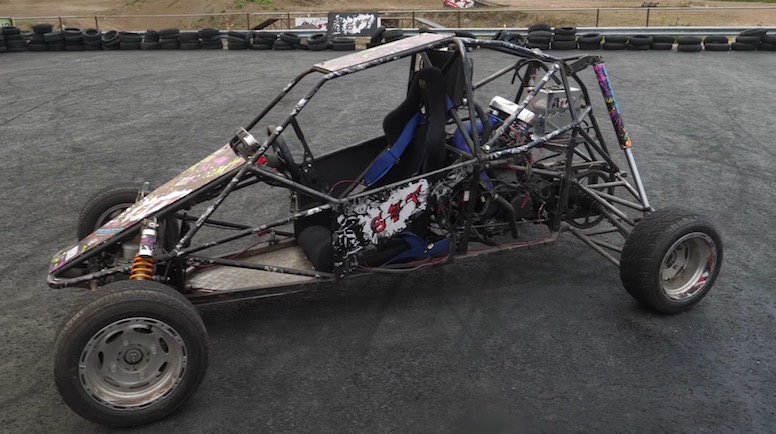 One of the most enjoyable aspects of living in this world of horsepower is that there are so many ways to go fast that it can get absolutely ridiculous. Sometimes, the goal at the end of the tunnel is to put together the perfect fusion of comfort features along with the power to have a nice smooth and exhilarating ride. Other times, the end goal is having an all-out power fest that will allow the person behind the wheel to move fort in the fastest way they can possibly imagine, ignoring every other feature of a vehicle. The beauty is in the eye of the beholder and personally, we have to say that all of them are a ton of fun to look at.

This time, we meet a contraption that’s known as the “Turbo Crosskart.” Essentially, the concept is taking something of an oversized go-kart and combining it with a turbocharged Hayabusa engine. It’s really the best of both worlds while thinking about going fast. On one side of the equation, it satisfies the need for a lightweight chassis by essentially being nothing but a bunch of bones and on the other, you get 300 horsepower chugging along from the high-revving powerplant. 300 ponies might not seem like much in the grand scheme of these big number builds, however, in the world of power to weight ratio, it definitely does a little bit more than most would expect.

By following along with the video below, we get to join in with the Stunt Freaks Team, learning a little bit more about what makes this combination so special and how exactly it works so hard to get those wheels rolling. We even get a little bit of time behind the wheel as a conveniently mounted camera gives us the best seat in the house as this machine absolutely shreds the tires, turning rubber to smoke in one of the best ways that we can imagine.

« Oil Prices Crash to -$36 Per Barrel, Could Combustion Powered Cars be Done For?