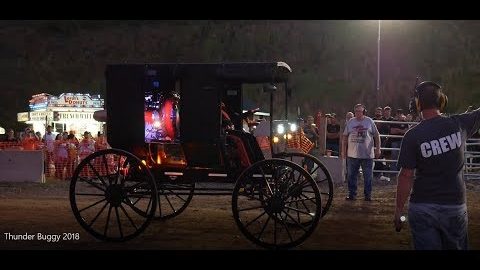 Just when we thought that we had seen everything, something new comes into the picture. Now, there are a lot of different combinations that we might see and wonder why we never thought of them. Sometimes, though, what we end up looking at is just so off-the-wall that we have no thoughts at all. All that we can do is sit back and watch, absorbing the obscurity that is unfolding in front of us. This just so happens to be one of those projects.

With the machine that is known as “Thunder Buggy,” we check out what is truly an all-new and original take on going fast. If somebody wanted to take a jet engine and slap it into something, this is probably the last platform that anyone would expect.

No, it’s not some sort of truck or anything like that. Instead, what we have is none other than an Amish buggy. That’s right, look no further than a horse-drawn carriage for the base to support jet propulsion.

In this video, we get to see that the pictures are for real. Anyone could slap a jet engine into any platform just for kicks without having it actually run. However, this time, the proof is in the putting. In the video below, we get to watch as the buggy starts up, runs, and even takes a couple of laps before coming back and shutting down.

This isn’t something that we would’ve ever wondered about until we saw the video. However, now that we have, we can’t help but rack our brains and think about how fast this thing could possibly go. Will there be a point in time that we end up seeing an Amish buggy land speed record?

At the end of the day, we have to admit that it’s definitely something that we will be keeping a close eye on. Heck, we’re pretty thrilled to just see this thing idling around at low speed.