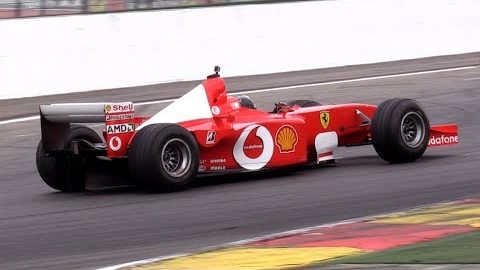 One of those markets that just seems to be unpredictable is that of artwork. Some pieces of art might be incredibly beautiful but monetarily worth nowhere near the amount that a completely random work holds. With this in mind, you never know what kind of value you’re looking at and it’s definitely a matter of beauty being in the eye of the beholder. In addition, art can come in all different shapes and forms as it can be laid down on a canvas, sculpted, or even in a live format as different creators use all sorts of different mediums to get to their artistic goal.

This time, the medium that we are looking at is known as “usable art” and more specifically, the topic of discussion is none other than Michael Schumacher’s first-ever Ferrari F1 car. You’d think that a car like this would sell at some big time automotive auction like Mecum or Barrett-Jackson but instead, we learn that it sold at a place known as Sotheby’s, at one of the auction house’s contemporary art events. When it rolled up on the for sale on the block, speculation would say that the car would bring in somewhere near $4 million, definitely an impressive sum of money for any machine. However, even $4 million would simply come and go as the price was driven up.

When all was done, the car would bring in an astonishing $7,504,000. Via Ferrari’s Corse Clienti program, “The new owner will be able to drive it on top race tracks around the world with tutelage from Ferrari’s own F1 technicians, mechanics, and test drivers.” For that F1 fan growing up, who has found their way into a sizable nest egg, this is the dream they have been waiting to acquire. However, it will come with quite a price tag to go alongside it.

« Quite Possibly the Most Expensive Crash Ever, Massive Pileup is Trending for Good Reason