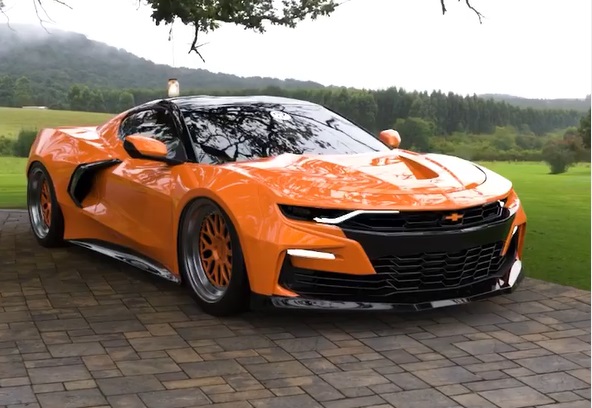 By the time it eventually became a reality, I’m not too sure how many people still believed the rumors. It seemed like there were heavy rumors of a mid-engined C6 and C7. In 2019, it seemed like it was just a lot more talk again but certainly not a reality.

Now that enthusiasts have finally gotten what they wanted, it seems like we’ve already moved on. I guess that it can be human nature to want the next best thing, even when someone manages to get exactly what it is that they want.

With that, we find that lots of folks have started discussing a mid-engine Chevrolet Camaro. Even though we thought that the Corvette was a far-fetched candidate for such a setup, the Camaro seems even less likely. After all, General Motors has finally put a sizable gap between the Corvette and Camaro to the point where they will be less likely to compete for the same business. However, that hasn’t stopped all sorts of people from rendering what such a Camaro would look like.

As it turns out, one builder was way ahead of their time and had already created something like this. The crazy thing about it, though, is that nobody has really heard anything about the car since 2011. When we heard whispers of the potential for a mid-engine Camaro, we wanted to do a little bit of research and see what we could come up with.

What we stumbled upon was a write up from Hot Rod Magazine back in 1999. The article featured the Cam-Aero. The car was built off of a 1968 Camaro that looked kind of odd. With the engine moved to the rear of the car, some substantial body modification had to be done.

Some of the fabrication work would include stretching and widening to fit components like a Chevy Lumina roof and Chevy Monza hatch. The car was topped off with a big block Oldsmobile 455 V8 and a Toronado transaxle. The setup was cooled by a chunky radiator and two large electric fans.

Last that we checked, back in 2011, a Jalopnik article said that the car was listed for sale on eBay. They say the bidding was at $25,000 with a day and a half left on the auction. It appears as if there was a reserve, though, so it’s hard to say if it sold or not.

At the time of the auction, the builder was deceased so who knows where the car has ended up these days? Now that we’ve reached 2020, it seems like the Cam-Aero has become one of the many mysteries of the internet.