With all of the action that goes down in racing, sometimes, it can be difficult to ...

With all of the action that goes down in racing, sometimes, it can be difficult to pick out some sort of favorite part. However, I think that most of us can agree that when it comes down to a photo finish, there isn’t much debate about how awesome these sequences can truly be. Nobody is turning down the opportunity to watch two racers who have just battled it out for hours upon hours as it comes down to the final seconds. It’s amazing how after sometimes hundreds of miles, all of the effort and investment can come down to an inch or two.

In this one, we check out some dirt track racing that really takes the liberty of delivering a heavy impact. As the race winds down, we eventually see that it’s only going to be between two competitors. It also seems like we have two different lanes that are on their way to victory. On one hand, drivers can choose the low lane. With the lower lane, the competitor will have the opportunity to use a shorter track. Obviously, that has its benefits. However, by choosing a higher lane, there’s a lot more speed on tap. There are all sorts of configurations to balance out and it’s going to be an all-out race to the finish. Keep this in mind because it creates one of the most awesome finishes we’ve ever watched.

By following along with the video below, we get the best view in the house. It’s absolutely insane how hard these competitors are wheeling, all to have the chance to call themselves the best. This one literally goes right down to the wire and instead of being separated by inches, we guess we can say the competitors were literally on top of each other as they would find their way across the line. It’s pretty insane how hard they battled and at the end of it all, things would just go airborne. 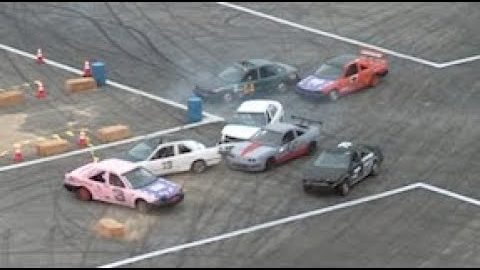