Sometimes, you’ll find that some stereotypes about certain areas can be truer ...

Sometimes, you’ll find that some stereotypes about certain areas can be truer than others. While some might be exaggerated, I have to say that almost every Texan that I have run into has been about their trucks. Now, that isn’t to say that the idea applies to everybody in a certain area but you might find that certain ideas are more fact than not when it comes to how certain folks in an area might think or act whether it be due to geography, popular opinion, or some other combination of factors. This time, we’re able to observe, firsthand, just how much folks in Texas seem to have love for trucks and how that passion comes to the rescue!

This time, We take a look back at what appears to be a scene from Hurricane Harvey this past summer. Now, this is a no way, shape, or form anything that resembles a good situation to be in but it really did bring out a silver lining in the fact that when people really are in a time of need, other human beings around them tend to step their game up, going above and beyond to really help out those who seem to be in a position where they can’t really help themselves. It warms the heart and shows that we, as people, maybe aren’t as bad as it looks with the way that everything happens to be portrayed in the mainstream media these days.

In this situation, we check out the scene from Texas as a heavy-duty truck from the National Guard seems to be stuck in a bit of water. It’s at this point that these monstrous machines really go above and beyond, strapping up to the truck that’s struggling and yanking it out, bringing the machine from it’s watery pit as they pull it back to dry ground once again. Whoever thought that these massively lifted trucks would never be of use is probably sticking their foot in their mouth right about now. It looks like, in this situation, the trucks really panned out and came to rescue. 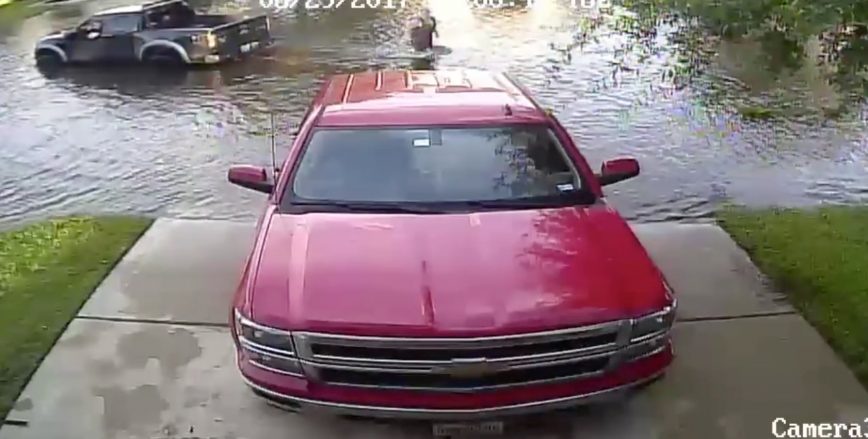