The Most Diabolical Stick Shift BEAST on the Planet! 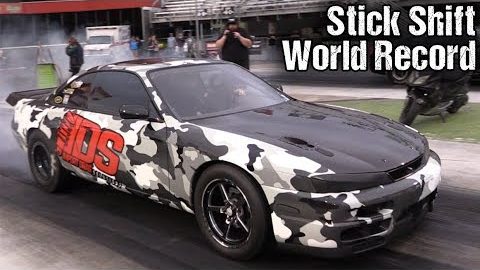 There is something about stick shift racing that really gets us excited. Sure, an automatic is going to be faster in the vast majority of situations. Having a computer decide when to shift is going to be much more consistent. However, there is really something to be said about the accomplishment of perfectly rowing gears in addition to having an awesome combination.

It seems like the stick shift world really has that extra layer of competitive nature. Don’t get us wrong, drag racers with automatic transmissions still need to have a good amount of ability up their sleeve. However, stick shift racing requires even more alignment between man and machine. The possibility for error is a lot more prevalent.

Over the past year or so, we have seen this format of racing really come to life. Records have fallen and drivers have been put on their A-game. A couple of weekends ago at Street Car Takeover in Bristol, we saw the rear wheel drive H-pattern record fall once again.

One of the competitors that has consistently been near the front of the pack in this rat race is Jon Rogers. He has become quite well known along with the Import Drag Solutions Nissan 240SX. With Jon behind the wheel, the 2JZ powered car has managed to find a way to surge strongly into the 7-second quarter mile realm. This is an impressive feat for any car, let alone one that is being shifted by hand.

By following along with the BigKleib34 video below, we watch the IDS car get quicker and quicker. With each and every pass, the personal best is pounded even deeper. This is followed up with a couple of record-setting passes that blast this car into the history books yet again. How far will the 240 be able to roll when all is said and done? There’s only one way to find out. Immerse yourself in the action by following along in the driver seat down below.