Most Insane “Hot Wheels” Track Ever Made, a Whole City 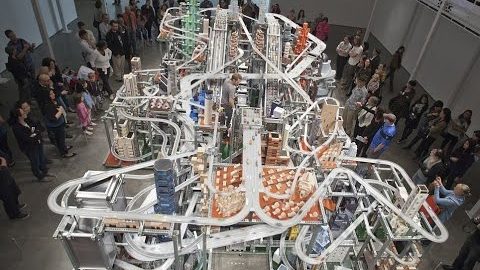 When we were kids, there were lots of toys that had the ability to capture our imaginations, allowing us to go on a ride outside of reality and create our very own world with whatever rules we saw fit. Hot Wheels were one of the toys that would allow us to get there, putting together all sorts of different tracks and creations through which you could send all kinds of different scaled cars. As you collected more tracks, you could build even bigger sets that would allow you to push your cars as far as they would go.

This time, we check out something that looks like a massive Hot Wheels set, but instead, isn’t necessarily even a Hot Wheels set at all. This massive city that sends us a thousand cars around it and features 18 roads, complete with six-lane freeways is described as more of a kinetic sculpture or a sculpture that is always moving. When it all comes together in one picture, it looks like a fluently moving city that comes without all of the traffic jams and road rage that you would see in real life. When all is said and done, thanks to conveyor belts fitted with magnets, we’re told that the equivalent of 100,000 cars passes through your vision every hour if you look at one part of the city.

Follow along in the video below that will take you along for the ride with this massive track and city in its entirety and show you the sculpture that looks to us like it’s designed to emulate the life of a city as it never seems to stop moving. After checking out this kinetic piece of art, be sure to tell us what you think of the massive structure and exactly what it symbolizes to you.