Most Intense Racing in the Universe, Winner Takes $20,000! 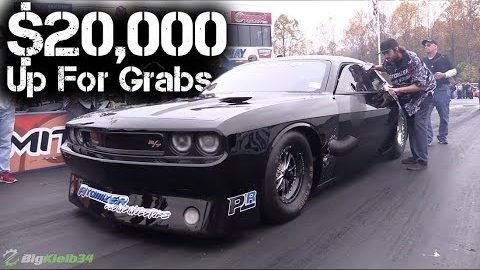 If you want to talk about some of the most intense quarter mile racing that goes down in the country, you can look to the Import verse Domestic World Cup Finals to get your fix of cars that throw it down on a 1,320-feet of racing surface. Among the classes that you’ll find at this event, they’re all plenty competitive and move out quickly but among them, the fastest of the bunch is definitely the Outlaw versus Extreme category that puts cars and drivers to the test with competition in the five-second range and some that reach out and touch 250 mph.

This time, we follow along with the class as they make their way down the track with some fierce competition, all with the aim of going home with victory and a cool $20,000 that goes along with it but they have to deal with a whole tournament tree of other people who are just as hungry, first. In a series of races where drivers keep on adjusting small things to try and get every last tenth of a second off of their elapsed-time as the field is pretty tight, things can really get intense as they’re pushing the limit and seeing just how much they can put to the ground without hazard. During this process, things tend to get a little bit feisty as the variables are really at an all-time high and at those speeds, one mistake could mean a disaster!

If you follow along with the video below, you’ll be able to find yourself engrossed in the thick of things as BigKleib34 cameras were rolling to toss you in the hot seat to see what some of the most competitive racing that you’ll find on a drag strip anywhere looks like! After watching these heavy hitters make their presence felt, be sure to tell us what you think of the lineup and how each of these individuals really pounded away at one another until only one was left to be crowned OvE champion and was able to go home with that nice payday.

« Even the Amish Love Drifting in the Snow