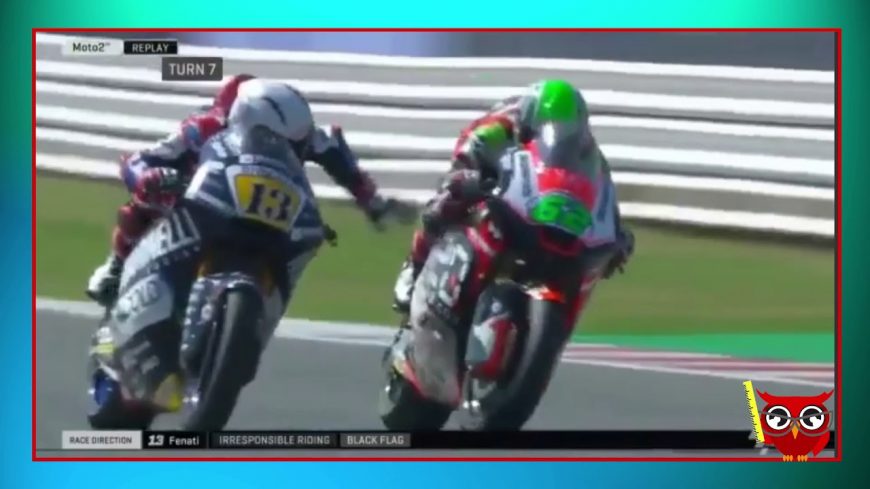 Moto GP is one of the fastest and most exciting forms of racing on the planet. It’s every bit as competitive as any form of car racing, without the added safety of roll cages, seat belts and having some metal between you and the other racers and the track itself. In all reality, it’s a wonder there aren’t more injuries and fatalities in the sport, but the fact that casualties are relatively few and far between just speaks to the skill of the riders.

However, this video shows a side of the sport that I personally have never seen, and it honestly completely changes the game when you put it into the “would have happened” perspective. So go ahead and hit that play button and we’ll discuss the insanity of what you’re about to see more in depth below.

So we have two riders, and since the video’s caption and comments are all in Italian, I have no clue who these riders are, we’ll call them bike/rider one, the bike with the lead as the clip opens, and bike/rider two, the bike in pursuit of bike one.

As rider two pulls even with bike one and appears to be in a position to make a pass, we see rider two reach over and yank the brake lever on bike one. As you can imagine, bike one’s nose dives briefly and we can see the bike begin to wobble, as yanking on the brake not only caused the bike to slow suddenly but would have certainly jerked the handlebars to the right too, upsetting the stability of the machine.

You can see clearly in the replays too, there is absolutely no denying this was in the intentional act, so let’s just think for a moment about how things could have played out. Let’s say this action caused bike one to crash and caused serious injury, or even death, to rider one. I have to assume with undeniable video evidence that rider two caused the incident, there would have almost certainly been criminal charges filed against rider two and almost no chance he doesn’t go to prison. That would leave two families without their loved ones, one lost to the crash and one to prison, and the sport without two obviously talented riders, all because one rider had a moment of immaturity and, if I may be so bold, classlessness.