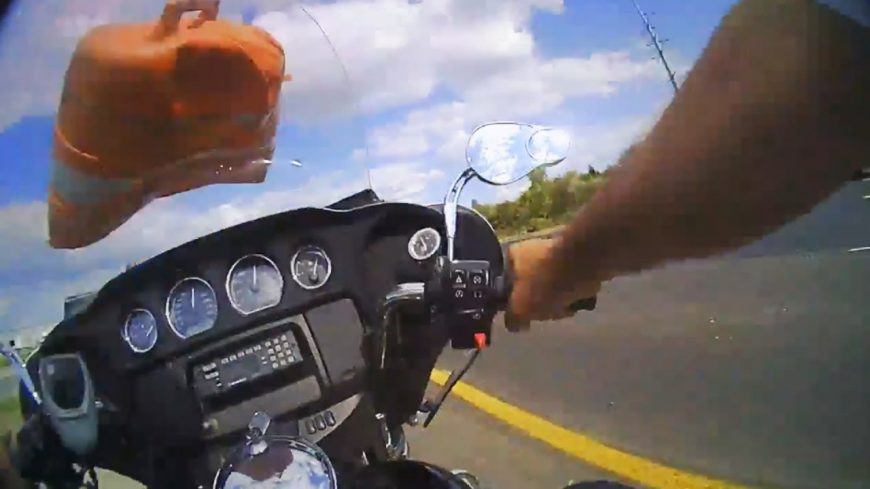 For the police, when the time comes time to chase down the bad guys, they really have to focus in on exactly what they are doing, balancing out the good and bad that could come from a situation, should they decide to pursue. After all, you don’t want to chase somebody down if said chase is going to be more dangerous than whatever it is that the person is doing in the first place to make you give pursuit. This time, that’s neither here nor there, necessarily, but when this police officer does begin to give chase, it appears as if his focus had slipped for just a moment. The result looks like it was incredibly painful, too!

Thanks to a body cam that was recording, we’re able to watch this motorcycle police officer as he clocks a driver speeding. as is his job, before he hops on his bike and turns it on, beginning to give chase to the driver, however, what happened next is something that he definitely didn’t see coming. It’s not like the traffic cone hopped out in front of him, but this officer definitely must’ve missed it as he probably had his vision trained on the speeder in question and therefore, he would barrel straight into a traffic guiding device and ended up flopping on the ground and dumping his bike, as a result.

If you check out the video below, you will be brought along with the situation to see exactly how it all went down. Luckily, it was reported that the officer was hospitalized with only minor injuries and he will be just alright. It’s not really clear exactly how something like this managed to happen but, you can bet your bottom dollar that this officer will have a closer eye on things like this next time. While it might be hard to balance out all of the factors that are in the mix during a heated situation like that, it’s definitely not something that you are going to do twice.

« YouTuber Explains How To Avoid Buying Flood Cars After Hurricane Irma and Harvey!