When you’re stunt riding in an enclosed area, there is a certain level of ...

When you’re stunt riding in an enclosed area, there is a certain level of danger to heading out and trying to put on a show on a motorcycle. However, the assumed risk isn’t all that high when you compare it to this situation. The worst that could happen is you fall off the bike and probably hurt yourself.

If you want to talk about something that is incredibly risky, take one look at this guy who decided to take the stunt show on the road quite literally as he pulled up in traffic and began to wheelie on his motorcycle. If you want to talk about a pretty bad scenario unfolding, then lay eyes on the situation because this guy simply just wasn’t lucky.

In this one, we watch the wheelie display in traffic as this guy yanks up the front end of his bike and rides on one tire all the way until he goes a little bit too far and it looks like he out rides his abilities.

It almost makes you cringe as the bike dumps on the ground and slings the rider down there with it, dragging this guy along the street as traffic blasts by in both lanes surrounding him. With all factors considered, this one could’ve gone much worse if he were to slide into another lane and be struck by a car that found that it was too late to stop as the rider bailed off his bike.

Follow along down in the video below that shows off the entire thing unfolding thanks to somebody’s helmet camera that caught all of the action. I think that this guy might have to go back to the drawing board again and practice a little bit further before he tries to do something like this again. Nobody wants to get caught up in a situation like this once, let alone twice!

How NOT to Release The Clutch on Your Bike 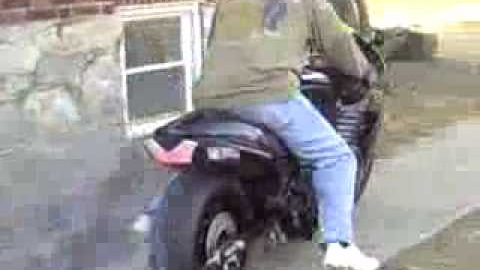