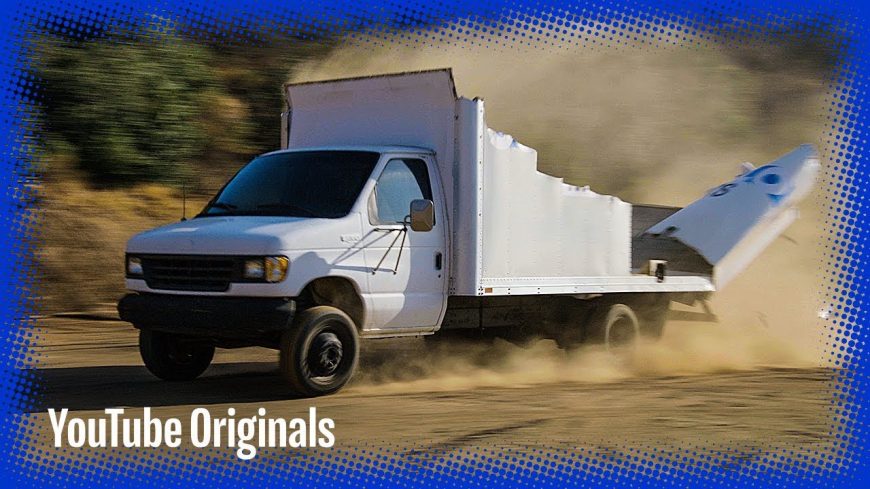 With one quick spin in the right section, YouTube viewers can find an array of videos where truck drivers didn’t exactly get the memo on low overhangs and bridges. It’s actually a rather common phenomenon. Trucks will get their caps peeled back by these unsuspecting situations.

One bridge, in particular, seems to be the most popular. The structure goes by the name of “11foot8” and has become quite infamous in claiming the roofs of various trucks. Over and over again, security cameras capture the action. These poor unsuspecting truck drivers end up meeting a rather expensive day time after time.

This time, the incidents are no accident at all. Instead, a little bit of destruction with purpose has come to our screens.

It appears as if the popular YouTube channel, The Slow Mo Guys, has stumbled upon this phenomenon. In response, they couldn’t help but go out and grab a couple of box trucks to try and see what the situation would look like slowed down.

With a couple of extremely high-speed cameras, they would emulate the occurrence. It had to take a good amount of courage to run into a low hanging overpass at a decent rate of speed. Several demonstrations later, we’re able to see the situation like never before.

There’s nothing like a little bit of destruction as seen in a way that the naked eye wouldn’t be able to process!

By following along with the video below, we get to tune into a little bit of slow-motion mayhem. It’s pretty neat that YouTube channels are able to operate and destroy things to make interesting content like this. Who would’ve thought that breaking things could be so profitable?

Sure, we have definitely seen stuff like this unfold on security cameras. However, watching it all on a high-resolution camera is definitely a step above what we have become used to.

« Rick From Pawn Stars Tries to Buy His Dream Car, Even if it’s Ruined by Modifications