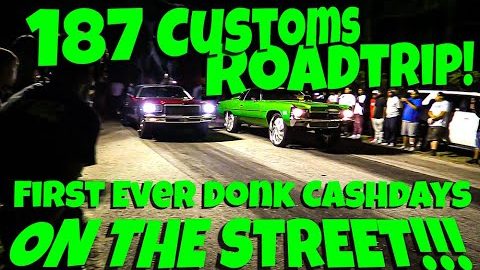 Over the past couple of episodes, we have been watching Murder Nova on his adventure to a Cash Days event far away. In the adventure, he would drive the machine that he was racing, a 1975 Chevrolet Caprice, from Oklahoma City all the way down to Florida. The journey would serve to prove just how much of a street car the machine really is as he would drive it to and from the Donk-Only Cash Days event.

This time, we would get to see the trip come to fruition. Murder Nova and his Caprice would finally make their way down to Florida for a little bit of racing action. When they got there, though, things weren’t exactly as they would seem. I guess you could say that the event was just a little bit disorganized. We’re not sure that there was quite enough racing to really make it worth the long journey.

As Shawn puts it, it seems like grudge racers were trying to put on a Cash Days. Naturally, in grudge racing, there is arguing, hustling, and natural confusion. The whole name of the game is to try to gain every advantage that you can over the next racer before eventually getting off one race at the end of the night.

Cash Days events, on the other hand, aren’t exactly operated that way. As Shawn puts it, you “Get in the lane and make a better pass than the person next to you.”

Apparently, this wasn’t something that exactly translated so well to this particular event. At the end of the day, though, it doesn’t seem like Shawn was too upset. Sometimes, especially when it comes to racing, that’s just the way that things are going to happen. By following along with the video below, we get to tune in with the final step of this journey to the first-ever Donk Cash Days on the street!