Last week, the Street Outlaws guys loaded up and headed west to take on some of the ...

Last week, the Street Outlaws guys loaded up and headed west to take on some of the baddest street racers in the state of California. While most of the competitors came from the northern part of the state, the two camps agreed to meet on semi-neutral ground in Southern California.

As one of the 405’s original badasses, Shawn is always down for a road trip with the Murder Nova, and as you can see in this video below, posted last week on the Murder Nova Facebook page, he came to hurt some feelings.

The car sounds amazing even at idle as Shawn inches the car toward the starting line. As he rolls up on the sticky rubber-coated asphalt, he brings the RPM’s up and you can hear the turbos start to spool, pumping the ProLine Racing Engines-built small block full of compressed air as the revs climb. Once the engine reaches the perfect song and the boost has reached the preset launch setting, Shawn bumps the car forward and then launches.

The Goodyear slicks scream as they dance on the threshold of traction, slipping but not spinning as the front tires lift off the ground. The wheelie bar takes over the steering duties briefly, then the car vanishes into the distance as the engine and tires both roar into the inky So Cal night. After the car shifts, you can hear Shawn pedal the throttle to keep the car in his lane, but he only lifts enough to settle the car, still laying down an insanely quick hit that should serve as a wakeup call to anybody who thinks they want to grab a lane beside the Murder Nova on the street.

While we know how things went down, we have to keep a lid on the results until after the California trip airs, so for now, this is all we can share. Look for more in the future, though!

Before The Murder Nova, Shawn Drove The Wheels Off This 10.5 Chevy! 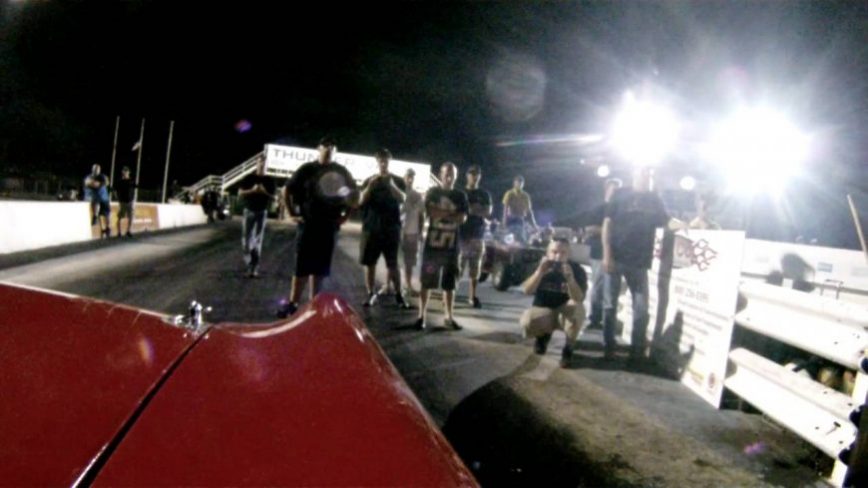