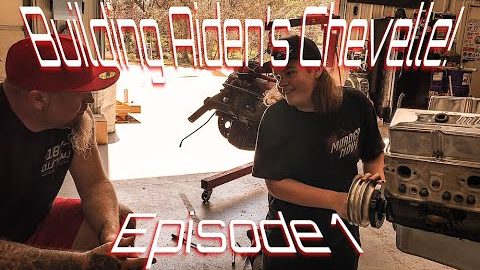 These days, it seems like the world has slowed down a bit. With quarantine keeping everybody at home, our future can be rather uncertain. However, that doesn’t exactly mean that we all have to sit idle. Instead, there are plenty of productive things that can be done while staying at home.

In the world of Murder Nova aka Shawn, that means spending a little bit of quality time with his son, Aiden. Right now, Aiden isn’t exactly old enough to drive by himself just yet. However, with a little bit of help from dad, he’s preparing for the time when he can.

At 13, he will be able to go down the track with dad in the passenger seat. However, he’s not allowed to go quicker than a 9-second pass in the eighth-mile. Last time out, the car couldn’t go faster than a 12-second eighth-mile due to what Shawn called a “tired” stock engine. That didn’t seem to sit well with Shawn and Aiden. Therefore, they decided to crack into the combo to make a little bit more power.

Shawn Tells us that this isn’t going to be a world-changing combination. It’s not exactly going to be a race car, either. However, it should be a pretty quick little ride that will hopefully be able to deliver an 8-second eighth-mile. From there, Shawn is going to dial it back just a bit so that it’s legal for Aiden to drive.

No matter how fast this thing ends up going, that’s not the important part. What is most important is that this father-son project is probably going to be one that Aiden remembers for the rest of his life. The awesome part is that we’re all going to be able to go along for that journey with them as this is just episode 1 of the series!

Check out how the Chevrolet Chevelle is coming along below! – 187 Customs

« Can the Silverado Trail Boss Handle the Nissan Titan Off-Road?