Musician, Will.i.am, has the Most Obscure Tesla that you’ll Ever Lay Eyes On, We Promise

Musician, Will.i.am, has the Most Obscure Tesla that you’ll Ever Lay Eyes On, We Promise

You know what they say, beauty is in the eye of the beholder and sometimes, you just ...

You know what they say, beauty is in the eye of the beholder and sometimes, you just see something that’s so off-the-wall that you need to take a minute to sit there and let it soak in to decide if you see that beauty or not. A perfect example of this can be observed for many if you take a look at will.i.am’s Tesla. The machine was captured on the side of the street when apparently the music icon was busy getting his grub on while the car sat, waiting for him in all of its futuristic design. If turning heads was what he was going for with something like this, that’s exactly what he got because this might just be the most obscure thing that you’ll see on the roadways this year. It looks like it’s about 50 years ahead of its time!

If you know anything about the entertainer’s persona, you know that his entire style is all about being off-the-wall and on the eccentric side of futuristic and that’s seems like what he was going for with this one and would be so inclined think that he hit the nail squarely on the head with this ride. There is certainly no mistaking this car for any other machine on the road, that’s for sure! From the wheels to the add-on body panels and everything in between, this thing is certainly the most one-of-a-kind ride that you’re ever going to see. Whether that be for better or for worse will be up to you, the viewer, to decide.

Follow along with the clip down below that will take you to the scene to give you a better idea of exactly what we’re talking about here. To say that this styling is incredibly aggressive would be a pretty big understatement. After you’re able to soak in all this car has to offer, be sure to tell us what you think of the machine in its entirety. They’re certainly a good amount of design to take in here so take your time and really try to catch every last detail that the electric car puts on the table.

Widebody Tesla Steals the Show at SEMA, What Other Tesla Mods are Coming? 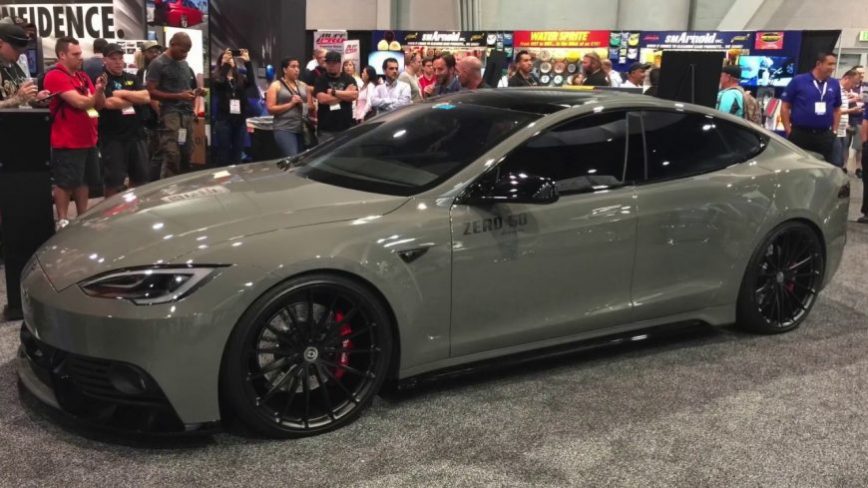