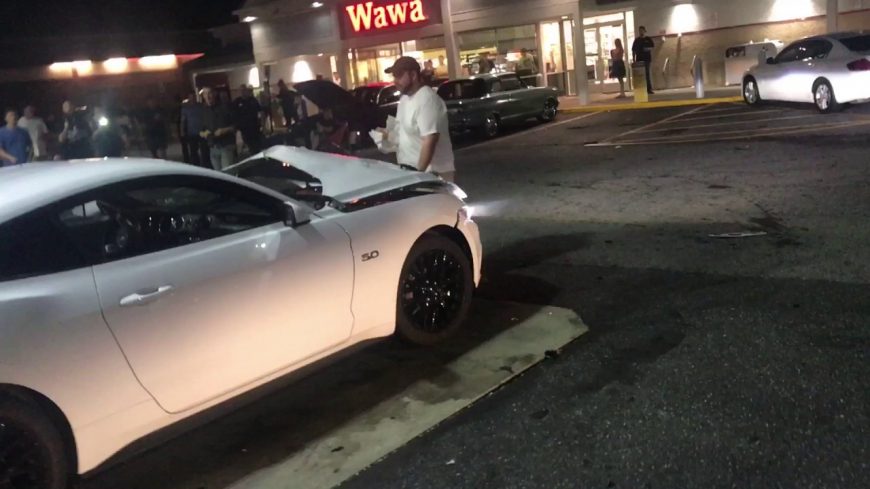 If the topic of discussion on the table is nitrous and the reliability of your system, you know that you’ll be in for a heated debate. While some people think that giggle gas, when introduced to your engine, is the best thing since sliced bread, others will go out of their way to tell you exactly why they refuse to run it on their setup. There’s definitely evidence to support both sides of this matter and it all just comes down to figuring out what works best for you.

Now I’m not sure if this particular situation was a matter of a freak accident or the result of somebody not really knowing what they were doing when installing or using their nitrous kit but, in either scenario, you would think that this one weighs on the side of pushing somebody to go with forced induction over spray for a street set up like this. Let’s just say that when this Ford Mustang rolled up to the gas pump at Cruisin’ Weekend in Ocean City, Maryland, things just about got dangerous.

Now, the man behind the camera here didn’t happen to get the explosion itself, however, he did manage to get the aftermath as the nitrous on this Coyote blew the hood straight up into the air, bending that thing in half like it was a piece of paper and leaving a good amount of damage behind including the smoldering underside of the hood as flames burned the protective layer just feet from a gas pump.

See the video down below for yourself that takes you on the scene to see exactly what transpired in the space right next to the pump. That certainly is not a series of factors that will make your heart warm and give you that nice and cozy feeling inside, that’s for sure! Luckily, the flames were extinguished and nobody was injured.