Mustang Rides Epic Wheelie Through The Finish Line For The Win

Mustang Rides Epic Wheelie Through The Finish Line For The Win

Donald Long’s twin radial races, Lights Out in the late winter and No Mercy in the ...

Donald Long’s twin radial races, Lights Out in the late winter and No Mercy in the early Fall, are infamous for flying cars. No fewer than a 4 cars have driven into wheelstands that continued to rise until the car reached the point of no return and actually left the racing surface and took flight. JR Pines very nearly joined that club as well back at Lights Out 8!

Lined up alongside the Fox body of Andrew DeMarco, Pines rolled up and laid down some fresh, sticky rubber on the fully-prepped South Georgia Motorsports Park surface. Both cars backed up after their burnouts and began the staging process, easing into the pre-stage beams, then bumping carefully into the stage beams. A second later, a flash of amber, then green and the race is underway.

It looks to be pretty anticlimactic as DeMarco spun the tires right away in his supercharged White Girl Wasted Mustang, but Pines had a show in store that more than made up for the loss of traction in the other lane. As the boost came in, Pines’ Mustang began to push its nose high into the Georgia sky, driving into one of those tell tale power wheelies that have ended so badly for other drivers here in the past.

Not wanting to join the ranks of SGMP’s involuntary pilot club, Pines pedaled the throttle and brought the nose back down, but not knowing DeMarco had slowed after spinning, he jumped back on the throttle, which basically made the nose of the car bounce right back into the air. Still in the “gotta get the win light” mentality, Pines kept his foot planted and rode out the wheelstand, tripping the 1/8th mile beams with the rear tires and taking the win in spectacular fashion.

It looked as if he hit the blocks, indicating he had crossed the center line, but thanks to great footage like this from Hans at Free Life Films, it was ruled that the car’s exhaust had blown the blocks over, resulting in Pines being awarded the round win. 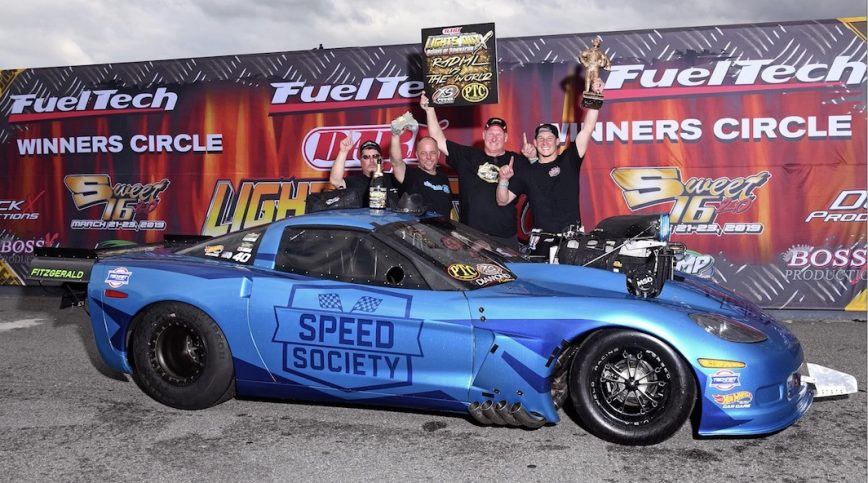